On the first of May, 1868, Thomas C. Dula met his death by hanging in Statesville, North Carolina, convicted of the murder of Laura Foster in the community of Elkville in Wilkes County on May 25, 1866. Dula’s execution ended a prolonged legal battle that included two trials and two appeals to the state supreme court and began the building of a legend in which fact and fiction mixed to create a story of love, jealously, betrayal, and murder. In the 1950s the Ballad of Tom Dooley, a musical version of the legend, was a hit song for the Kingston Trio.(Dooley was thought to be the local pronunciation of the name Dula.)

Listen to a 1920s version of the ballad by Grayson and Whittier. 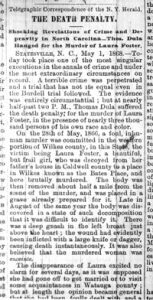 Stripped of the melodrama which came to surround them, the more or less agreed upon facts of the case are that on the 25th of May, 1866, twenty two year old Laura Foster left her father’s house on horseback, telling a friend whom she saw on the road that she was riding to meet Tom Dula who was going to marry her. Tom was seen by several people later that day going in the direction Laura had traveled. A day later Laura’s horse returned without her, and she was never seen alive again. Several unsuccessful searches were made for Laura during the summer. Tom was suspected of being involved in her disappearance, and some time late in June he fled the county, eventually going to work on the farm of James W. M. Grayson near Trade, Tennessee. Although no body had been found, a warrant was issued for Tom Dula’s arrest. He was captured in Tennessee by deputy sheriffs from Wilkes County with the aid of James Grayson and was jailed at Wilkesboro on July 11.

Early in August 1866, Ann Melton, a married woman of the Elkville community, told Pauline Foster (no relation to Laura) that she knew the location of Laura Foster’s grave. Under suspicion herself of complicity in Laura’s disappearance, Pauline passed this story on to the authorities, who located the shallow grave containing Laura’s corpse early in September. Tom Dula and Ann Melton were indicted for the murder of Laura Foster on October 1, 1866.

The subsequent trial revealed a web of sexual relationships and violence that both disgusted and fascinated observers at the time. Tom Dula was known as a womanizer, having formed a sexual liaison with Ann Melton—perhaps with her husband’s knowledge—in about his fifteenth year, which lasted until he enlisted in the 42nd North Carolina Regiment of infantry in 1862. Tom returned from the war in June 1865 and took up again with Ann, while at the same time beginning sexual affairs with Pauline Foster, who worked for the Meltons, Laura Foster, and at least one other woman. Some time in March, 1866, Tom became aware that he had a venereal disease, probably syphilis, which had also infected Ann Melton, her husband, and Pauline Foster. Although Pauline seems to have been the source of the infection, Tom believed he had caught it from Laura Foster and threatened her publicly.

Tom Dula was represented at his trial by Zebulon Baird Vance, former governor of North Carolina and future United States senator, one of the best lawyers in the state. Vance obtained a change of venue for the trial to Statesville in Iredell County and got Tom’s trial separated from Ann Melton’s. The state called several witnesses, but relied primarily on circumstantial evidence linking Tom to the vicinity of Laura’s grave and the testimony of Pauline Foster. The jury brought in a guilty verdict on October 21, 1866, but Vance appealed to the Supreme Court of North Carolina, which ordered a new trial. After some delay, the second trial began on January 20, 1868, and once again Tom was convicted. This time the North Carolina Supreme Court upheld the conviction, and Tom Dula was hanged. Just before his death Tom wrote a short note saying that Ann Melton had had no part in Laura Foster’s death. Primarily on the strength of this note, Ann was acquitted.

Over the years story tellers and writers transformed the murder into a tragic love triangle about an innocent young girl, Laura Foster; a wicked, jealous woman, Ann Melton; and caught between them, Tom Dula, a victim of circumstances. Some characters in these stories are changed beyond recognition. James W. M. Grayson, on whose farm Tom worked after he fled Wilkes County, and who aided in his arrest, becomes Tom’s nemesis. In some accounts he is the vengeful sheriff of Wilkes, chasing Tom into Tennessee. In some, he is Tom’s rival for the affection of Laura Foster, bitter with jealousy. The story was also remembered in song, according to legend first sung by Dula himself. Folklorist Frank Warner heard Frank Proffitt of Watauga County, North Carolina, sing a version of the Ballad of Tom Dooley which came ultimately from his grandmother, who knew both Tom Dula and Laura Foster. It was this version that the Kingston Trio recorded in 1958.

Sources
John Foster West. The Ballad of Tom Dula: The Documented Story Behind the Murder of Laura Foster and the Trials and Execution of Tom Dula. Boone, NC: Parkway Publishers, Inc., 2002.