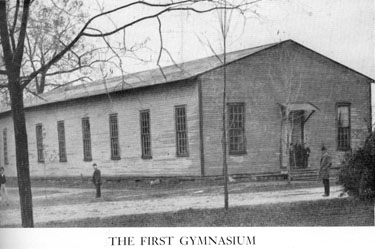 A closer look at the 1885 UNC dance mentioned in a previous blog post has revealed the event’s importance in the history of dances on campus. According to Battle’s History of the University of North Carolina, it was customary for students to temporarily convert the library, then located in Smith Hall (present-day Playmakers Theater) for ballroom events. In 1884, however, University Trustees voted to ban all future dances in Smith Hall, responding to groups who felt that “modern dance” was “injurious to morals.” This put student planners of the 1885 Commencement Ball in quite a predicament, as Smith Hall was the only building on campus large enough to accommodate such events.

President Battle, who was more concerned over the use of the library as a dance hall than any threat to student morality, organized a corporation to erect a new building for that year’s Commencement Ball. Technically off-campus, but still in Chapel Hill, the building would serve as a much-needed gymnasium and a ballroom. Pictured above, the Old Gymnasium was eventually torn down in 1916, and would have been located between current Phillips and Peabody Halls.

The 1885 Commencement Ball became the first ball held off of University grounds and was a resounding success; students celebrated their graduation, and Battle and those opposed to dancing on campus got what they wanted. The following is a description of the festivities by an unnamed reporter: “The new, large and commodious Gymnasium Hall was a scene of gaiety and beauty … On, on went the dance till morning dawned, and then the merry throng began to break up to retire to sweet slumbers or to make ready to begin their journeys homeward.”