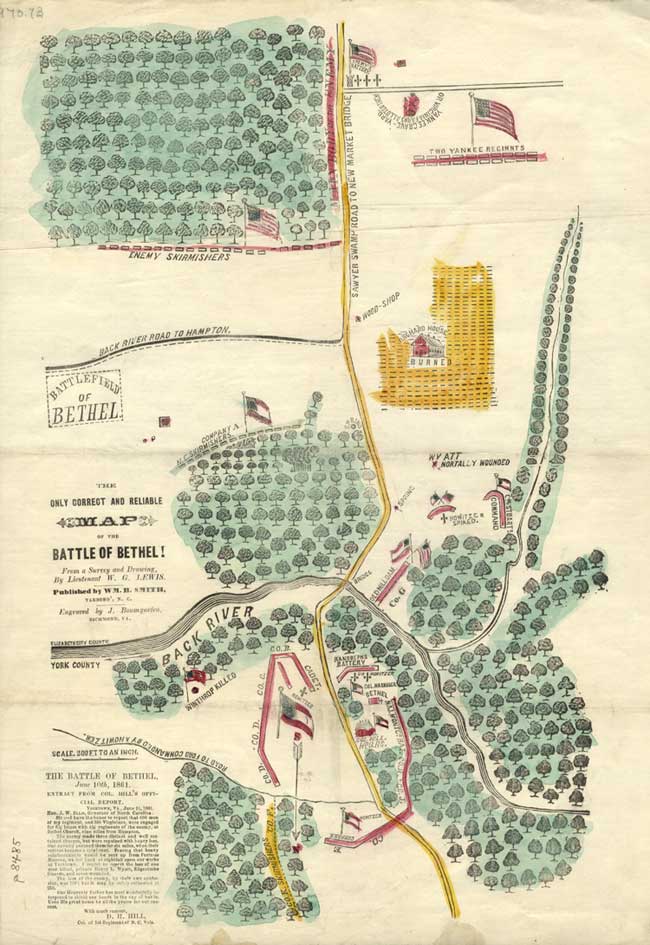 One could say that the Civil War began for North Carolina on the 10th of June, 1861, near Bethel Church, Virginia. On that day the First Regiment of North Carolina Infantry (6 Months, 1861) engaged U. S. troops in what has been called the first battle of the Civil War.

The First North Carolina Infantry was mustered into state service in Raleigh on May 13, 1861 and was led by Colonel Daniel Harvey Hill of Mecklenburg County. Consisting of colorfully named units from several counties, such as the Hornet Nest Rifles, Charlotte Grays, Orange Light Infantry, Buncombe Rifles, Lafayette Light Infantry, Burke Rifles, Fayetteville Independent Light Infantry, Enfield Blues, and Southern Stars, the regiment reflected the general enthusiasm of the early days of the war.

Then, on May 17, the regiment was accepted into Confederate Service and ordered to Richmond, Virginia. From there it was sent to Yorktown, and went into camp. On June 6 the regiment marched south eleven miles to Bethel Church, Virginia, sometimes called Big Bethel, and bivouacked without tents in the rain. The regiment had brought only 25 spades, 6 axes and 3 picks, but Colonel Hill was determined to put his command in a good defensive position. Dirt flew, and by June 8 the fortification of the camp was substantially complete. That night Confederate General John Magruder arrived at Bethel to take command.

Some nine miles from the First North Carolina at Bethel was the Federal stronghold of Fortress Monroe. Built to protect the United States from foreign attack, the fort served during the Civil War as a staging ground for United States troops and ships and a stepping off point for military operations into Virginia. General Benjamin F. Butler, commander of Union forces at Fortress Monroe, learned of the movement of the North Carolina Regiment and dispatched General Ebenezer W. Peirce with 2,500 troops to attack the Confederates at Bethel.

Discovering the Federal advance, the North Carolinians moved to their prepared positions. Around 9:00 a.m. on the 10th of June the Battle of Bethel began and by 2:00 p.m. it was over. Federal troops made successive uncoordinated attacks on the First North Carolina’s position and, meeting a spirited defense, retired from the field. Federal casualties were 76 while North Carolina’s total was only 11. Of these 11, Henry Lawson Wyatt of Tarboro, North Carolina, was the only Confederate soldier killed.

Over the next four years tens of thousands of North Carolinians served in every theater of the conflict, and North Carolina’s total loss from the war, 40,000, was greater than any other Confederate state. To North Carolina Confederates, however, the state’s participation in the first battle of the war was a source of pride, and “First at Bethel” was a boast for many years in the Tar Heel State.

Walter Clark, Ed. Histories of the Several Regiments and Battalions from North Carolina in the Great War 1861-’65. Raleigh, NC: Published by the State, E. M. Uzzell, Printer and Binder, 1901.

W. G. Lewis. The Only Correct and Reliable Map of the Battle of Bethel!: From a Survey and Drawing. Tarboro’, N.C.: Wm. B. Smith, [1861]. North Carolina Collection. University of North Carolina at Chapel Hill.