OK, it’s time for another edition of “Where The Heel?”. Does anyone recognize this building? 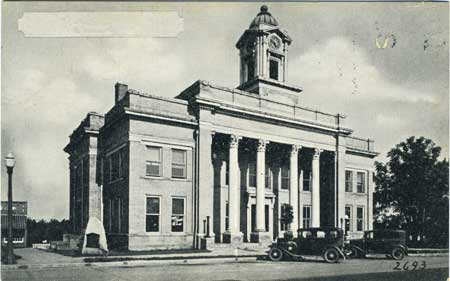 As always, leave your guess as a comment. We’ll let you know if you’re right! 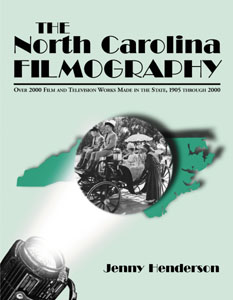 Loyal NCM reader Jon Elliston has just published an interesting story about Camp Summerlane of Rosman, N.C., and its forced shut-down in 1963. (He stumbled upon details concerning Camp Summerlane while researching a different topic in the North Carolina Collection Clipping Files.) The camp was designed as a kind of social experiment where children and adults had equal input in deciding rules and activities, no censorship was enforced, and older campers were given the chance to do outreach work with migrant workers. 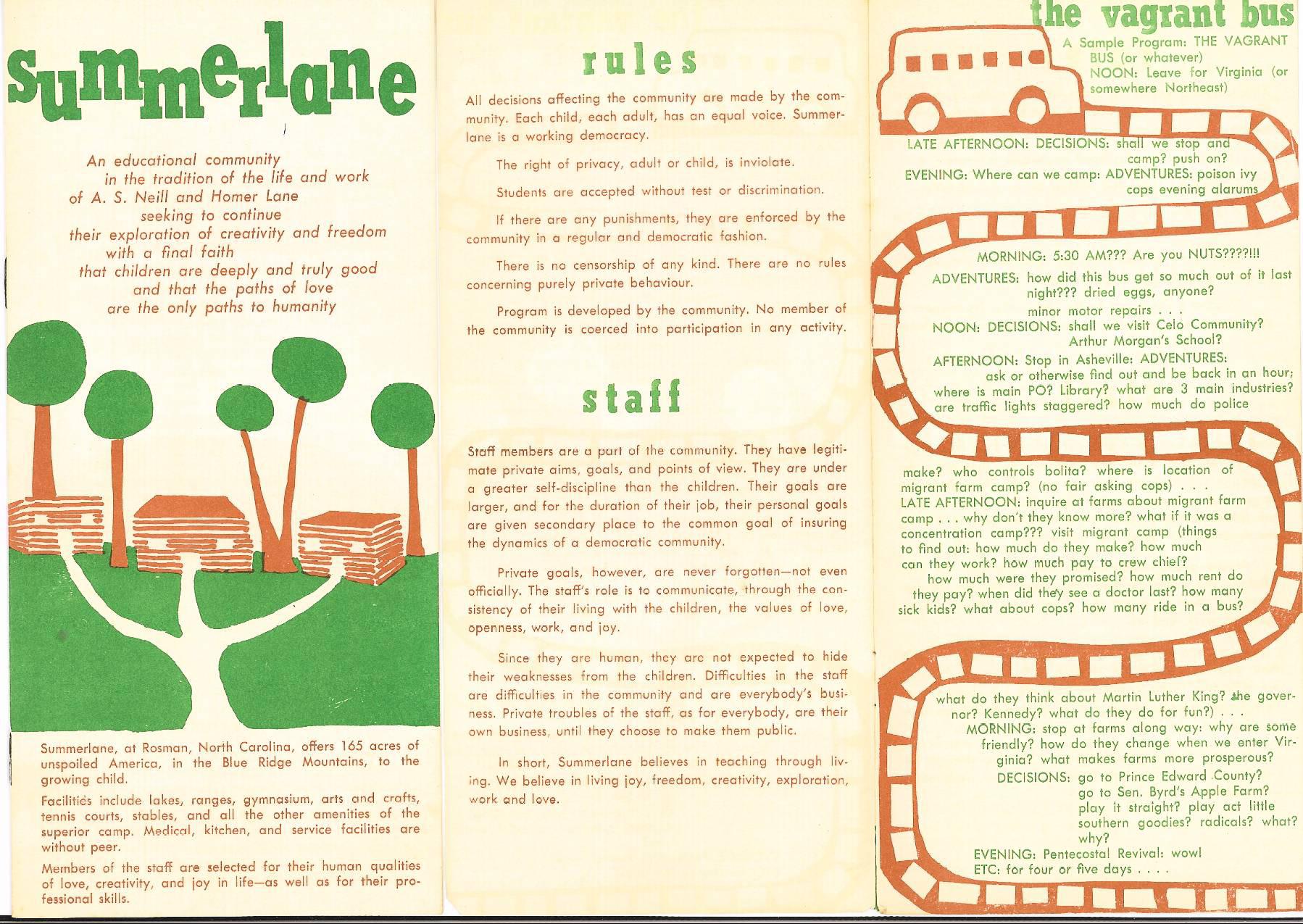 However, locals responded aggressively to the camp’s opening, though the reasons for this are still a matter of debate. Some claim it was the camp’s integrationist stance that stirred the locals, while others cite rumors of nudism, sex exploits, drug use, and communist connections.

Roughly a week into the camp opening, groups of angry townsfolk gathered at night to “run Summerlane out of town.” Dozens of armed locals waited outside the camp yelling threats. A nearby pond was set on fire, and as the flames died down, camp staffer George Hall claims that he “Got into one of the little boats and paddled next to the reeds that were still burning. Then [he] roasted some marshmallows.”

To find out more about the background of Camp Summerlane, how the shutdown events escalated and eventually concluded, and to view more original documents about these events, see the full series from Mountain Xpress: Cruel Summer: The Attack on Camp Summerlane.

Once again engaged in one of my favorite pastimes — browsing back and forth between the Encyclopedia of North Carolina and the South Carolina Encyclopedia — I was pleased to find that in both of the Carolinas the Sport of Kings was, at least in the antebellum period, the king of sports. A love of fast horses brought us together. From the very beginning of the colonial era, Carolinians talked horses, raced horses, and bet on horses. As early as 1734, horses raced on Charleston Neck for a prize of a saddle and bridle. In our collection there is a copy of a map of Hillsborough, North Carolina, drawn in 1768, which shows a racetrack in addition to the handful of houses and public buildings. Horse racing went into a decline after the Civil War, but has made something of a comeback in recent times in both Carolinas.

Has anyone in the great wide world of North Carolina Miscellany Land ever heard of Wonderland, North Carolina? I stumbled upon an image of it (see below) the other day while flipping through Views of Potter Farms Development : Showing Various Stages in the Evolution of Potter Farms, which is a wonderful pamphlet that we have in our vault collection. 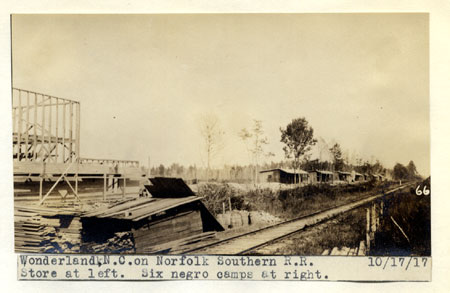 From the description below the image and other clues in the pamphlet, Wonderland seems to have been in the Beaufort County region along a line of the Norfolk Southern Railroad. Did the town disappear like the Cheshire-Cat?

Our next installment of “Where The Heel?” features another imposing brick structure, see below. 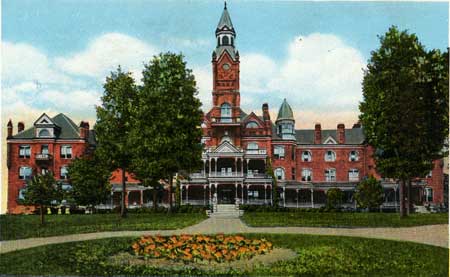 Can anyone tell me where this is? If you have a guess, leave it in the comments for this post. We’ll let you know if you are correct! We still don’t have any prizes to award the winners, but you can brag to your friends about being the winner.

I thought that I had found the best combination of town names in a single county when I wrote about Madison County a few months ago. But then Mike Hill pointed out to me two small towns in northern Moore County named Noise and Quiet, shown here on a 1901 state map:

It looks like Noise showed up first on a map, appearing on an 1888 map of the state, while Quiet first appeared, as far as I could find, on a 1892 state map. I looked at a couple of good Moore County maps — the soil survey from 1916 and the highway map from 1938 — but the towns were nowhere to be found. At first I thought that a bored cartographer at Rand McNally stuck them there as a joke, but then I spotted them on a 1901 post route map of North and South Carolina: 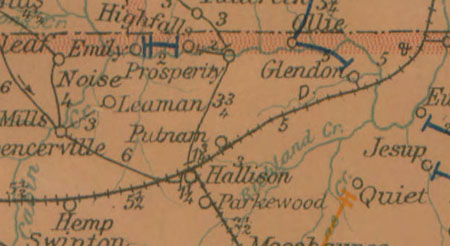 These post route maps are fascinating — each postal route is shown and color coded by frequency of mail delivery. The sample shown here indicates that in 1901 the residents of Noise received mail six times a week, while things were a little quieter in Quiet, with the mail arriving only twice a week.

This discovery led me to that essential reference book, Post Offices & Postmasters of North Carolina, published by the North Carolina Postal History Society in 1996. What I found there confirmed what I had seen on the maps. The post office at Noise was in operation from 1882-1912, while the one at Quiet ran from 1883-1905. Post Offices & Postmasters is a must read for the amateur toponymist, and I flipped through the entries for the rest of the county to see what other odd post office names Moore County had had. There were plenty. At various points in the 19th and early 20th century, the following post offices were in operation in Moore County: Antler, Blues, Deposit, Grotto, Home, Lonely, Narrow, Old Stones, Skill, and Tempting. I bet the poor folks in Lonely hardly got any mail at all.

We all know that North Carolina proudly claims “First in Flight” on its license plates (much to Ohio’s chagrin). North Carolina also claims other firsts, such as the first state university, the first miniature golf course, and Babe Ruth’s first professional home run. Well, North Carolina will have another first to add to its long list at 12 p.m. on September 8, 2008. At that time and on that date, the Wilmington area will become the first television market in the country to switch to an all-digital signal. The Federal Communications Commission chose Wilmington as a test market for the upcoming nationwide switch on February 17, 2009. Read more about it at the FCC’s “The Digital TV Transition.”

The recent death of Jesse Helms, formerly United States Senator from North Carolina, started me thinking about our collection of transcripts of Helms’s Viewpoint television editorials. Between 1960 and 1972 Helms was the on-air editorialist for the evening news on Raleigh’s WRAL-TV. Our former curator, Bill Powell, talked the television station into letting us have transcripts of the talks, more than 2500 editorials in all. Direct copies of the videos had long since disappeared. Almost from the day we made them available the editorials have been among our most frequently used items, reflecting in part Jesse Helms’s rise to a position of power and leadership in the Senate and in the conservative political movement in the United States. Opinion on the content of the editorials varies widely, if not wildly, but they are never dull. Helms, who had been a reporter or editor most of his life, was a gifted writer and polemicist. Another attraction of the WRAL editorials is that, as a recent biographer has noted, Helms was remarkably consistent in his political views over his long political career, and the opinions of Helms the editorialist link closely to the opinions of Helms the political leader.