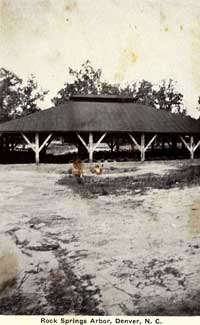 At the end of July 2008 thousands of people gathered in Denver, North Carolina, for the annual Rock Springs Camp Meeting. The oldest continuing camp meeting in North Carolina, Rock Springs traces its roots to a meeting held at Rehobeth Methodist Church in Lincoln County in 1794. Camp meetings grew out of the isolation of life in a frontier area and the strong revival spirit of protestant Christianity. Often churches of different denominations would combine to sponsor the meeting, and families would come from miles around to the campground for a series of preaching and singing events which lasted from several days to a couple of weeks. Some families have been returning to the same tents – actually small cabins – at Rock Springs for generations. The accompanying illustration, from our post card collection, shows the permanent “arbor” at Rock Springs. [Thanks to loyal NCM reader Kevin Cherry for this suggestion.]