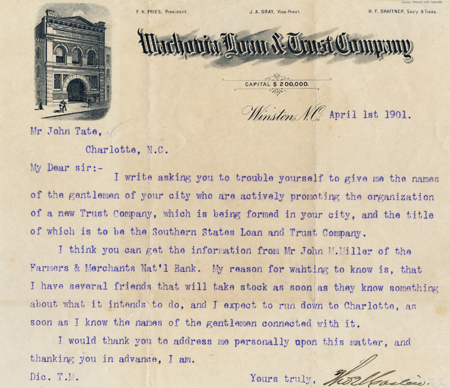 Charlotte-based Wachovia Corporation finds itself in the news today as Citigroup is buying out a major portion of Wachovia’s operations as part of the ongoing financial upheaval.  I headed to the Forsyth County folders in the photographic archives’ North Carolina County Collection to see what might be of interest to mark this eventful day in the state’s banking history, and found the document presented here.  The donated document finds itself in the photographic archive because of the illustration of the Wachovia Loan and Trust Company’s first permanent building in Winston, N.C.  It is also fascinating to note that the letterhead proclaims the trust company’s capital at $200,000—about $5.5 million today.

Though not directly concerned with Wachovia, the content of the message, dated April 1st 1901, might be interesting to historians of the state’s banks. Thomas Maslin, listed in the 1906 Winston-Salem directory as the assistant treasurer and secretary at Wachovia Loan and Trust Company, wrote to John Tate of Charlotte, N.C., requesting “the names of the gentlemen of your city who are actively promoting the organization of a new Trust Company . . . the title of which is to be Southern States Loan and Trust Company.”  Maslin wanted to know because he had “several friends that will take stock as soon as they know something about what it intends to do, and I expect to run down to Charlotte, as soon as I know the names of the gentlemen connected with it.”

Some quick catalog checking and Googling located no reference to a Charlotte banking firm by that name. The 1900-1901 Charlotte city directory has no listing for a John Tate employed in banking, only a traveling salesman for a mills supply company.  There was listed a Southern Estate, Loan & Trust Co., but the “Farmers and Merchants National Bank” to which Maslin refers was actually the Merchants and Farmers National Bank.

Maslin suggested that Tate contact John M. Miller, listed in the 1900-1901 Charlotte directory, as the Merchants and Farmers cashier. Five years later in the 1905-1906 directory, there is listed a Southern Loan and Savings Bank that occupies the same building as the Southern Real Estate and Trust Company, and the two firms—with different operating officers—share a joint full-page advertisement.

Does anybody have any additional information to help fill in the story?