If you haven’t done so already, check out WRAL’s “Tar Heel Treasures.” From Scaly Mountain General Store to the Bogue Inlet Pier, it’s a great way to view North Carolina. 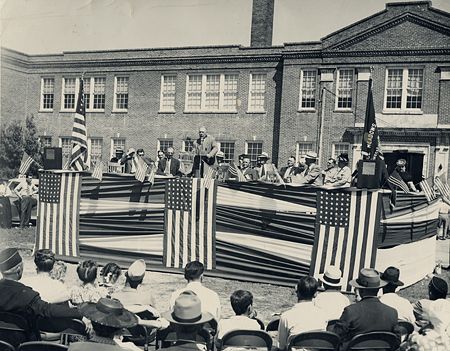 I’m afraid Veteran’s Day would be over before I could sort out the story behind this photograph.  On the surface it’s pretty straight forward: the caption on the back of the photograph reads, “Rep. G. A. Barden addresses Armistice Day celebration, Jacksonville, 1946.”  Neither of the two Jacksonville newspapers covered the story, which is a bit odd considering the back of the photograph also has “3 col” written in pencil, suggesting it was published at three columns wide.  And it’s doubly odd when you consider that Billy Arthur—seated to Barden’s left—donated the photograph to the NCC, and he owned one of those two newspapers. (Arthur was also a North Carolina state representative at the time.)

Could it be that the date is incorrect?  It could be that the photograph was published elsewhere at a different time.

Perhaps our friends at Duke University special collections, which holds long-time United States Representative Graham Arthur Barden’s papers, can shed some light on the topic of the speech?

Anyone want to explain why the flag on the right partially reads “_?_ce Meadows / Swansboro” rather than be a flag related to Jacksonville?

Or are these all visual red herrings? 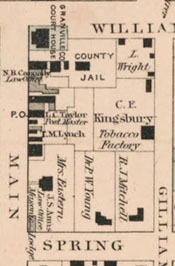 Among the recent additions to the North Carolina Maps project are several excellent detailed maps of North Carolina towns published by O.W. Gray & Son in Philadelphia in the late 19th century. These maps show an impressive amount of detail of downtown areas, including the names of businesses, schools, churches, and property owners. The O.W. Gray & Son town maps now online include Wilmington, Louisburg, Monroe, Oxford, and Wadesboro.