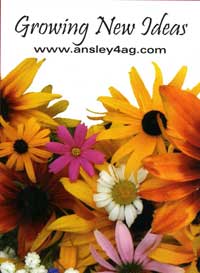 In an earlier posting on political ephemera, I mentioned my preference for homegrown materials. This seed packet fills the bill. It was distributed by the Ronnie Ansley campaign. A co-worker picked this one up at the state fair. Ansley, a Democrat, ran for Commissioner of Agriculture, attempting to unseat the Republican incumbent Steve Troxler.

It’s a beautiful image, tied to a slogan that is appropriate for the office Ansley sought. The slogan also evokes the theme of change that both parties used in the national campaign as the election drew closer. The packet contained seeds for these flowers: bachelor buttons, baby’s breath, annual blue flax, scarlet flax, Shirley poppies, and candytuft. We’ve removed the seeds and will be saving just the packet.

Ronnie Ansley did not beat Steve Troxler. (The voters went for Troxler, 52.05% vs. 47.95% for Ansley.) If Mr. Ansley runs again in four years and if the economy is still in the tank, maybe he can hand out packets of vegetable seeds—something that voters might find very useful.

One thought on “Election Ephemera Runner-Up”