Most people know that sometime North Carolina resident (but always fabulous) Kristi Yamaguchi won the 2008 Dancing with the Stars competition. Will lightning strike twice for the Tar Heel state? We’ve got a good shot because the always competitive Lawrence Taylor (UNC ’81) is one of the contestants this year. In his college and pro career LT was known as speedy, aggressive, and tenacious. How will those characteristics enhance the foxtrot, rumba, and the nine other dances in the competition? I wondered if LT was a dancer earlier in life, so I consulted his two autobiographies, LT: Living on the Edge and LT Over the Edge. Neither mentions dancing, but he did form a casual singing group, D’Fellas, with some high school buddies. If LT needs guidance for his transformation from athlete to dancer, he can check out Kristi’s 2008 blog entries. The rest of us can mark our calendars for March 9th, the start of the new season.

Welcome to our second slogan-based installment of “Where the Heel?” Remember, we’re looking for the North Carolina location that is described by a specific slogan. If you have a guess about the location that fills in the blank below, leave it as a comment. Ready, set, go!

I have to admit that I’ve tried moonshine before…don’t ask, don’t tell. However, I haven’t tried Catdaddy Carolina Moonshine, but it seems that Hollywood loves it. Check out the recent story from WRAL: Carolina moonshine official spirit of Grammy gift bags.

I hate to keep hitting the blog with postcard images (we’ve got a lot of other cool, interesting, and fun things at the NC Collection), but I’m working with them day in and day out. So…here we go. 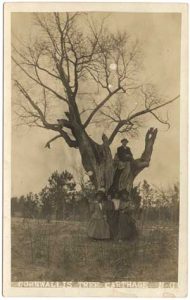 Does anyone out there in the blogosphere know anything about the “Cornwallis Tree” in Carthage, North Carolina? I haven’t explored our collection for an answer, but I thought I’d throw it out there for your enjoyment. 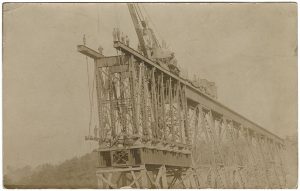 In the past month and a half, we’ve uploaded postcards from several new locations to our North Carolina Postcards website.

You can check out these new towns here:

Here’s the postcard that Lew Powell mentioned in a recent comment, along with another from the collection that shows Republican President William Howard Taft on that same May 20, 1909 visit. Taft was in Charlotte to celebrate the Mecklenburg Declaration of Independence. 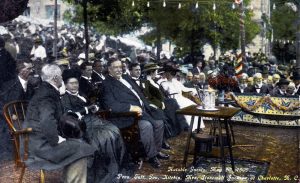 It’s time for a new installment of “Where the Heel?,” but I’m adding a twist to this one. Instead of identifying a place based on an image, we’re looking for the North Carolina location that is described by a specific slogan. Can you fill in the blank below? If you have a guess, leave it as a comment. Good luck!

In the last few weeks, Alamance County has lost two of its “native sons”:

This past Monday (February 2) former N.C. State Representative and longtime Insurance Commissioner, James “Jim” Long passed away.  Only two weeks before on January 23, former governor Robert “Bob” Scott also passed away.  Both men were born in Alamance County (Long in Burlington and Scott in Haw River) and came from families with rich traditions of public service to the people of North Carolina.  Images of both Long and Scott can be found in the newly processed Edward J. McCauley Photographic Collection.  This photographic collection contains images taken by Edward J. McCauley, who was a photographer for the Burlington Time-News between the years 1949 and 1974. The Times-News had a special interest in local folks who were elected to state-wide offices.  Selections from the McCauley collection have been digitized, and there are several pictures of former governor Bob Scott (and of his father William Kerr Scott) included in this online presentation from different periods throughout his career.  More images of both men will be added to the digital portion of the collection in the coming weeks.

In the February 1 edition of the Raleigh News and Observer, political columnist Rob Christensen wrote a piece that evoked the memory of a funeral for another former governor (and U.S. Senator) from Alamance County in 1958: the funeral of Robert Scott’s father, William Kerr Scott.  As one would imagine, McCauley was covering the event for the Times-News and took numerous pictures of the funeral and the reception at the Kerr Scott homestead in Haw River.  A selection of images from the Kerr Scott funeral will also be added to the collection in the coming weeks.

Check out Harry McKown’s latest entry in the “This Month in North Carolina History” series. In honor of a sister institution, Harry examines the establishment of the University of North Carolina at Greensboro. 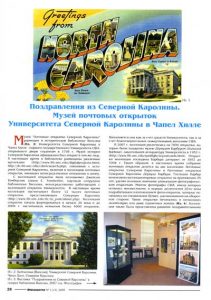 This image is from a recent article featuring the Durwood Barbour Postcard Collection. Interest in the collection is nothing new…it’s been featured in several recent articles and even on television. However, this one is a bit different…it’s from a Russian postcard journal.

I don’t speak or read any Russian, but Wilson Library has several staff members who do. I’ll get this translated as soon as I can.