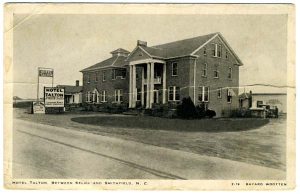 The Johnston County Heritage Center has a small collection of photographs documenting the Catch-Me-Eye Explosion, March 7, 1942.   The explosion happened early in the morning when a truck carrying munitions collided with an automobile near the Catch-Me-Eye, which was a popular tourist location and service station on Highway 301 between Selma and Smithfield.

According to the biographical sketch for the collection listed on the Heritage Center’s website, “Four people were killed, and many others were injured.  The entire Catch-Me-Eye complex and and the 2 1/2 story Hotel Talton across the road were levelled, and windows shattered over a mile away in Selma’s Edgerton Memorial Methodist Church.  Many local people were convinced the explosion was an air raid by the Germans.”

The postcard above is of the Hotel Talton, ca. 1938, which was located across the street from where the explosion occurred.

Here’s a link to the collection guide at the Johnston County Heritage Center.