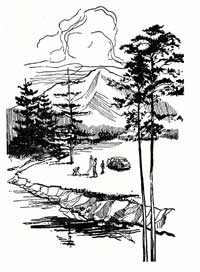 New in theaters today is a movie with a strong North Carolina connection: Race to Witch Mountain. It has been advertised by Disney as a 21st century “reimagining” (rather than a remake) of the 1975 movie Escape to Witch Mountain, which in turn was based on a book of the same name. While the new movie is set in Las Vegas and other locations in the UFO-prone Southwest, the book was set in the Blue Ridge Mountains of North Carolina and Witch Mountain was based on our state’s Brown Mountain. Located on the Burke/Caldwell county line, Brown Mountain has a long history of unexplained phenomena and is famous for the unexplained lights that people have seen on its slopes for more than 150 years. For more about the book, check out our “Read North Carolina Novels” site.