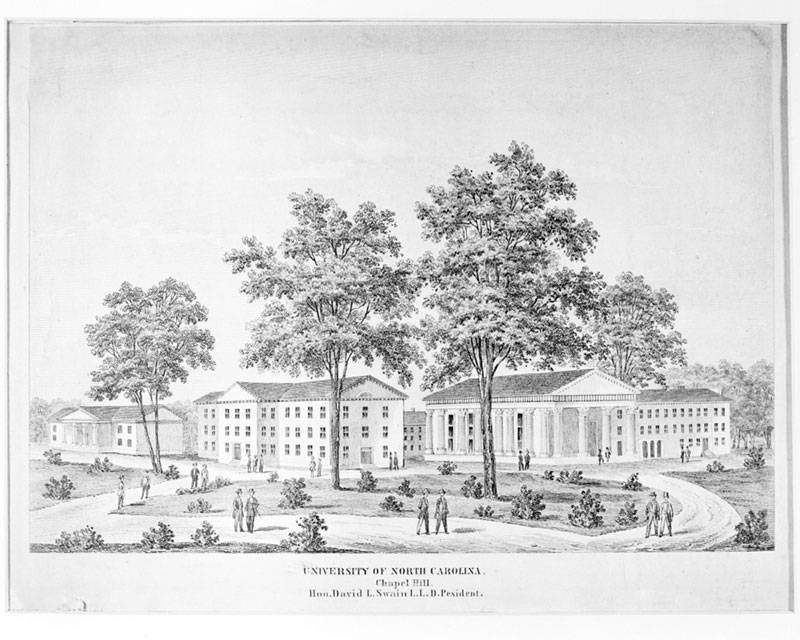 Wednesday, the first of June 1859, was hot and dry in Chapel Hill The University’s annual commencement exercises had already been going on for two days, and the morning’s program was just winding up when a large party of visitors, tired and covered with dust, arrived from Raleigh. Although late, this party was perhaps the most important part of the graduation ceremonies, because it included James Buchanan, 15th President of the United States and the second chief magistrate to visit the University campus.

In anticipation of Buchanan’s visit the largest crowd ever to have attended graduation gathered in Chapel Hill, putting a serious strain on the resources both of private hosts and public accommodations. Every carriage in the village and surrounding countryside had been pressed into service transporting the crowds, and when they were not sufficient, springless wagons took up the slack in a bone-jarring sort of way. The carriage of the President and official party was drawn by matched horses. Anything that could pull a wagon, including combinations of horses and mules, sufficed for the rest.

Music for the occasion was provided by the Richmond Armory band. In honor of the President, for the first time in its history the University invited a militia company, the Wilmington Light Infantry, to participate in the festivities. Reporters from the New York Herald and the Richmond Dispatch covered the visit, along with several local papers. Difficult as observers of the modern University may find it to believe, in 1859 UNC ignored and neglected the press. One reporter complained of paying two dollars for a ride from Durham in a wagon and then having to sleep on the floor when he got to Chapel Hill.

Buchanan was a hit with the crowds and seems to have enjoyed himself thoroughly. He made several well received impromptu speeches, although he usually spoke from prepared texts. He dined on the lawn of President Swain’s house with members of the senior class, the faculty, and the trustees. He met the public at a reception under the Davie Poplar during which, a University historian points out, the President kissed only one young lady. Perhaps this was noted especially since Buchanan, the only bachelor president, seems to have enjoyed kissing young ladies. The wife of one of his cabinet officers noted that the President “…had a good time in N. Carolina for Mr. T. says he kissed hundreds of pretty girls which made his mouth water.”

Buchanan came to Chapel Hill near the end of his presidency at a time when he was feeling deep unhappiness and frustration in his political life. When he was elected president in 1856 he brought to the office not only his political popularity, but also substantial experience and talent. He had served for years in both the Pennsylvania legislature and the United States House and Senate. He had been U. S. ambassador to Russia and Great Britain and had been Secretary of State under President Pierce. He had for decades been a shrewd leader of the Democratic Party in his home state and the nation. In less than four years, however, his presidency had fallen apart under the stress of sectional animosity. Buchanan was a northern man with southern sympathies. He liked and admired many slave holders and believed slavery to be a benevolent institution. However, he also revered the constitution and federal union. Caught between militant supporters of slavery on the one hand and abolitionists on the other, Buchanan could find no political way out except to appeal to everyone to obey the law. This position satisfied no one and the country moved ever closer to dissolution as his term came to an end.

When Buchanan spoke at Chapel Hill he often referred to his love of the union, the constitution, and the law. Perhaps this is one of the sources of his popularity during the visit. Perhaps North Carolinians, many of whom supported both the federal union and the “peculiar institution” of slavery, could identify with James Buchanan, caught, and increasingly helpless, between veneration of the union and the conflict over slavery.