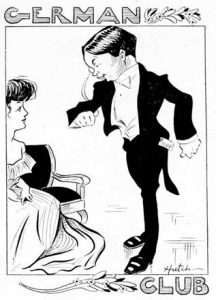 A UNC grad and former student assistant of ours recently shared with us some information that may explain the origins of a term much in use at the University through about the first half of the twentieth century. Some of the student dances at UNC were called Germans. There was usually a Fall German and a Spring German. The dances were organized by a German Club, but so far as we can tell, the club had nothing to do with Germany or the German language. So, where did the name come from? Katie Littlefield emailed us that while doing research on customs and traditions at the University she discovered a passage in Phillips Russell’s These Old Stone Walls claiming that dances at Chapel Hill in antebellum times were called balls. After the Civil War they were called Germans, “…led by gentlemen who could carry out elaborate cotillion figures.” While cotillion dances had dropped out of fashion in the early nineteenth century, Katie notes that they were reintroduced in New York society in 1854 and called “German cotillions.” Could the University’s Germans be a long-forgotten abbreviation of German cotillion? We think it may well be so. How about you?

The image above is from the 1906 Yackety Yack.