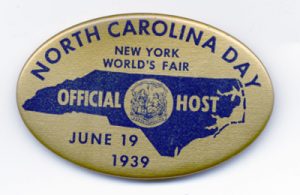 Above are two buttons that represented North Carolina at the 1939 World’s Fair held in New York. These buttons come from the Lew Powell Memorabilia Collection, and according to Mr. Powell, Gov. Clyde Hoey dedicated the state’s exhibit at the New York World’s Fair with praise for “the English, Scottish, Irish and German… desire of freedom,” for North Carolina’s rise from “the black night of conflict and defeat,” and for “the song of the saw in the vast forests” (punctuated with a recording of a circular saw). “Everyone in North Carolina,” Hoey concluded, “lives long and well and has a good time.” 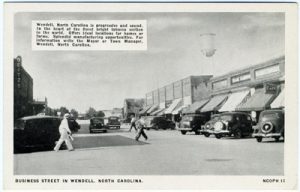