One of my colleagues pointed this item out to me the other day, and I thought it would make a nice “Where the Heel?” posting. I’ve edited the county name out of the image, but I’ve left in the other phrases. Do you know what county claims to be the “Cradle of Liberty in America”? If you have a guess, leave it as a comment. Once the question is satisfactorily answered, I’ll include an image of the unaltered seal and the bibliographic information.

And the answer is New Hanover County. The full image is below. 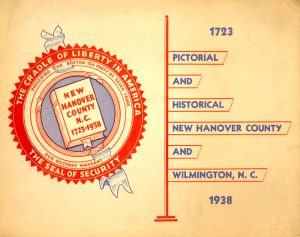 The editor has this to say about the claim:

The twilight of Liberty in America first showed its brilliancy when the Colonists of the Lower Cape Fear denounced the tyrannical Acts of the British Crown upon her subjects, imposing an unjust tax, without representation, known as The Stamp Act of 1765.

With “Blood and Death” was the answer:—Heroism and determination upon the part of the Colonist crowned their glorious efforts, enhanced by the signal defeat of the British at the Battle of Moore’s Creek Bridge.

The facts are indisputable as true records of events! As the first who defied British Power, more than ten years before the Declaration of Independence, were the people of the Lower Cape Fear.

11 thoughts on “Where Is “The Cradle Of Liberty In America”?”