Early postcards were often images drawn and colored from photographs of places or events.  You can easily see this when you have two nearly identical postcards from different publishers or colorists.  An advantage to working from a photograph is the ability to idealize the reality of a scene.  Postcard producers frequently removed unsightly utility poles, sidewalks, fire hydrants, etc.  At other times, they would take the liberty of adding flagpoles, parked automobiles, clouds, etc.

Below are two postcards showing the Queen Street Cotton Market in Kinston, N.C.  The two cards have been made from the same photograph, but some of the minor details have been adjusted.  The card at the top retains the utility poles, while the second card has removed entire poles where possible, and only the top half of the poles where it would mean more difficult editing. 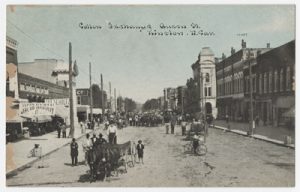