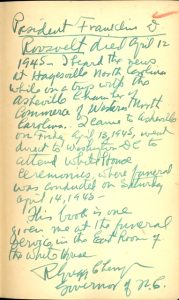 I just found an interesting item in the stacks: The hymnal, as authorized and approved for use by the General Convention of the Protestant Episcopal Church in the United States of America in the year of Our Lord MCMXVI. Inside the book, I found the inscription you see above.

The hymnal is a part of our collection because of its “associational value,” not its original content. The item was owned and inscribed by former governor R. Gregg Cherry, who received it when he attended the White House funeral service for Franklin D. Roosevelt on April 14, 1945.