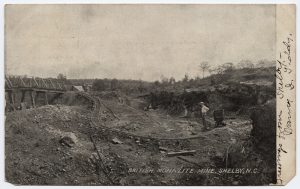 Above is an image of a Monazite mine in Shelby, NC, dating to ca. 1906. Monazite was used in the gas mantles of the late 19th century and early 20th century that provided incandescent light.

According to an article in a 1907 bulletin published by the US Geological Survey, monazite mines in North and South Carolina produced 846,175 pounds of monazite sand in 1906, the year this postcard is postmarked. At that time, the monazite mined in the Carolinas was valued at approximately 18 cents per pound.

Monazite was mined in the US only for a short time before larger deposits were found in India and Brazil. In addition to the other sources pertaining to monazite held by the NCC, you can also check out the Wikipedia article on the mineral here. We’ve added a thumbnail image of the postcard above to the article.