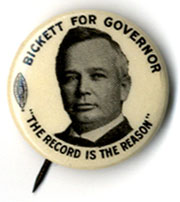 “The scheme is so transparently impossible, so plainly a gold-brick proposition, that ordinarily the inmates of a school for the feebleminded could not be induced to part with their coin for a certificate of membership…

“But running through the whole scheme is a wicked appeal to race prejudice. There is a hark back to the lawless time that followed the Civil War…There is no need for any secret order to enforce the law of this land…Just now all of us need to be considerate and kind and trustful in our dealings with the Negro.”

— Gov. Thomas Bickett, circa 1921, responding to the revival of the KKK inspired by The Birth of a Nation. Bickett was quoted in an NAACP handbill calling on citizens not to “allow Ku Klux Klan propaganda to be displayed in the movies in New York City.”

The Dictionary of North Carolina Biography describes Bickett as “a traditionalist in his attitude toward race relations [who] nonetheless manifested a sympathy for the lot of the blacks uncommon among Southern politicians of his time.”