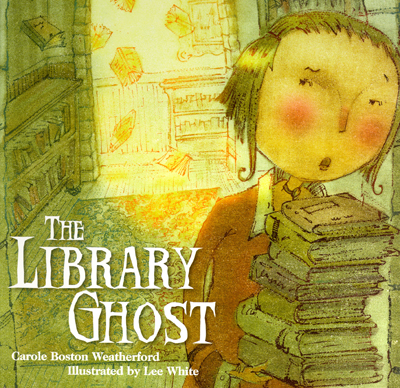 “[Secretary of War Edwin M.] Stanton had come armed with a plan, drawn up at the President’s request, for bringing the states that had been ‘abroad’ back into what Lincoln… called ‘their proper practical relation with the Union.’  The War Secretary’s notion was that military occupation should precede readmission, and in this connection he proposed that Virginia and North Carolina be combined in a single district to simplify the army’s task.

“[Secretary of the Navy Gideon] Welles took exception, on grounds that this last would destroy the individuality of both states and thus be ‘in conflict with the principles of self-government which I deem essential.’ So did Lincoln….

“[Lincoln] had reached certain bedrock conclusions: ‘We can’t undertake to run state governments in all these Southern states. Their own people must do that — though I reckon at first some of them may do it badly.'”

I wanted to alert NCM readers to a new blog maintained and updated by Elon University’s Belk Library Archives and Special Collections staff, “Under the Oaks.”

Take a look and add it to your feed reader! 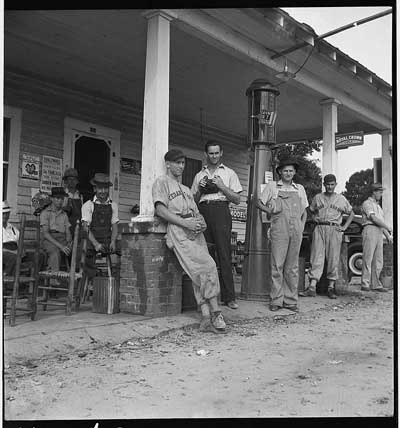 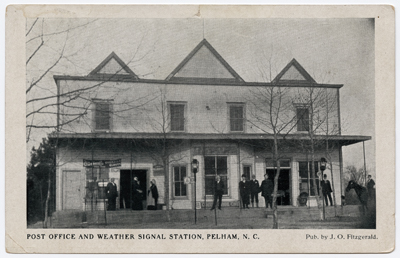 During October, we uploaded a few new towns to the North Carolina Postcard collection.

The postcard above depicts a building with a false front that housed the town’s post office and weather signal station in Pelham, Caswell County. 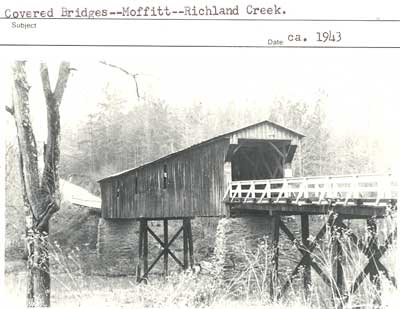 Covered bridge over Richland Creek, near Moffitt (Randolph County), North Carolina. Copied from an original in the NCC Photographic Archives.

If you have not seen or used the revamped Highway Marker database, I highly recommend checking it out: North Carolina Highway Historical Marker Program.

“In late December 1700, John Lawson and a group of eight Englishmen and Native Americans set off on a 500-mile, two-month trek into the Carolina backcountry. The expedition began in Charles Town and headed north and west as far present-day Hillsborough, North Carolina, and then turned east, ending up in the settlement of Bath on the Pamlico Sound in February 1701. During the journey, Lawson kept a detailed journal, made sketches and maps, and gathered specimens of plants and animals. This month, Documenting the American South celebrates the 300th anniversary of the first publication of Lawson’s journals…”

Just how abusive was Eleanor Roosevelt in her comments on the South? In “Weep No More, My Lady” (Miscellany Sept. 17) W.E. Debnam rendered her as Carry Nation gone radically chic. But the archives of her “My Day” column (http://www.gwu.edu/~erpapers/myday/) reveal a far gentler and more tolerant Mrs. Roosevelt. Three examples from her surprisingly frequent missives from North Carolina:

April 17, 1941: “We visited two housing projects on the outskirts of Charlotte; one for colored people and one for white people in the low income group. They were nice houses and very much appreciated by the tenants. The rents are reasonable and everyone seems very happy.

“The playground for Negroes had very little equipment, but I hope that this is only temporary and that it is going to be possible to give the colored children a similar opportunity for recreation.”

Nov. 19, 1941: “I went to the NYA [National Youth Administration] resident center in Greenville and was tremendously proud of what these North Carolina boys had achieved, for they built all of their own buildings! They have some excellent shops in wood-working, sheet metal work, radio, photography, etc.

“Much of their work is, of course, done for the Army, because NYA  training is with a view of making these young men valuable in defense industries as quickly as possible.

“The health program is stressed in North Carolina…. Every boy is given a complete physical examination, and I was appalled to hear that somewhere around 70 percent were found to be undernourished.”

Aug. 15, 1942: “Cannon Mills has evidently been enlightened in dealing with its [16,000] employees. I was told it encouraged ownership of house and land by employees. If work is slack, the building and loan fund does not collect any payments during the layoff period.

“[Charles] Cannon told me most of the work is done on a piecework basis, and outside of a few people in the day laborer class the average earning power of a woman is $22 a week… so I was surprised to find the mill was not unionized.”