Marchant was born in Pennsylvania and moved to Hamlet, North Carolina in the early 1900s, where he was originally employed by the Seaboard Air Line Railway.  Massengill suggests that Marchant was drawn to Hamlet because it was the hub for the SAL railway, and as a result, was an active town with many technological advancements.

After working for the railroad company for several years in different positions, including as a civil engineer and a photographer, Marchant quit the company in 1907 to open a photography studio in town.

In addition to photographing towns and railroads, Marchant also did a series of real photo postcards about the construction of the dam at Blewett Falls.  The Great Pee Dee Electric & Power Company started work on the dam in 1905.  The dam was finished in 1911, and but water wasn’t flowing until 1912, when the power plant first started producing hydroelectric power.  The power plant and dam were built to supply power to the nearby mills, railways, and telephone and telegraph lines. Below are three photo postcards showing the power plant under construction, a water wheel unit at the power plant, and a view of water almost coming over the dam. 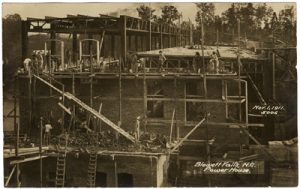 You can view Marchant’s postcards of Blewett Falls, Hamlet, and Rockingham on our North Carolina Postcards Website here.