Sundays in North Carolina used to be a lot quieter than they are today: perhaps less hustle and bustle, but certainly a lot less commercial activity. Throughout most of the twentieth century Sunday was a day of rest, not just by religious conviction, but also by law. Varying from county to county and town to town, North Carolinians were firmly in the grip of the “blue laws.” Business activity was strictly limited. In most places only drugstores and gasoline stations were open. In Raleigh in the 1930s almost everything was closed on Sunday, although you could play golf, swim in public pools, and, strangely enough, gamble on slot machines.

Sunday had long been recognized as a day of rest, and for most devout Christians it was also a day set aside for worship. From early days in Europe and later in colonial America, however, the restful nature of Sunday was protected legally. Story has it that the first Sunday law passed in the New Haven colony in 1665 was printed on blue paper, thus giving a name to all the “blue” laws that followed it. In January 1716 (1715 in the Julian Calendar) the colonial assembly of North Carolina adopted the first Sabbath Observance Act prohibiting improper activities, including profanity and prostitution, on Sunday. Replaced by an act of 1741, this remained the Sabbath Law of North Carolina throughout the eighteenth and most of the nineteenth centuries. Although this Sabbath Law was never repealed, it was often observed in a very casual manner. An observer in 1858 noted the people conducted business, gambled, hunted, fished, and engaged in all sorts of other activity on Sunday throughout North Carolina.

In the late nineteenth century and into the twentieth Sunday Closing Laws were tightened down through action on the local level. This resulted in a patchwork of legislation varying from town to town and county to county. Sometimes there were even significant differences between the level of Sunday activity in a town and in the county surrounding it. In 1961 the General Assembly enacted a new state Sunday Closing Law, but in 1962 the state Supreme Court threw it out as unconstitutionally vague. While the Supreme Court may have been hostile to a statewide law, it continued to turn away challenges to local “blue laws,” and it was not until the 1970s that local government—for the most part in the bigger towns and cities—began to repeal the Sunday Closing Laws. Although some of the laws remain on the books, in general, most areas of commerce, entertainment, sports, and recreation on Sundays in North Carolina have become a livelier, busier time.

A collection of all the public acts of Assembly, of the province of North-Carolina, now in force and use : together with the titles of all such laws as are obsolete, expir’d, or repeal’d…. Newbern: Printed by James Davis, M,DCC,LII. [1752].

As of today, you can no longer smoke in almost all of North Carolina’s bars and restaurants. At one point in our history, however, many bars and restaurants (along with many other establishments) weren’t even open on Sundays. Maybe this sounds strange to you or maybe you remember those days…regardless, you can read more about the history of North Carolina’s “Blue Laws” (and why they were called “Blue Laws”) in Harry McKown’s most recent installment of “This Month in North Carolina History”: 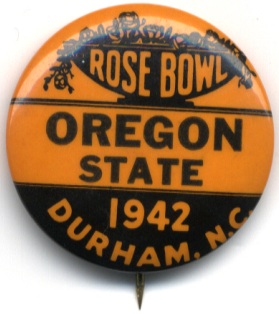 Out of fear the Japanese would bomb Pasadena, the Rose Bowl was played in Durham on this day in 1942.

“Borrowed bleachers from the University of North Carolina and N.C. State boosted stadium capacity from 35,000 to 55,000 spectators. A flood of East Coast sportswriters descended upon Durham for their first Rose Bowl, while only a single writer came from southern California….

“[Oregon State] upset previously undefeated Duke [20-16]. The heavily favored Duke team lost on a cold, rainy day to an underestimated defensive team that successfully protected an early lead. Coach Wade later stated he spent too much time being host and too little time preparing the team. He also gave the team several days off to go home for Christmas. Nevertheless, the university community and nation had more important concerns to face beginning January 2, 1942.”