On this day in 1906 the Football Rules Committee legalized the forward pass. Also, the Dow closed above 100 for the first time, coincidence ? 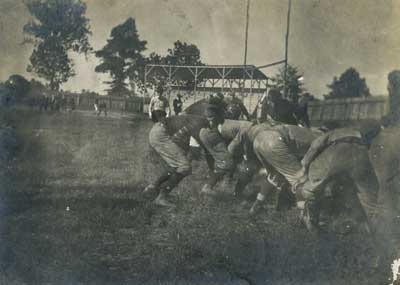 This 1901 game action photograph played at Emerson Field (site of present day Lenoir Dinning Hall) shows future journalist Louis Graves at quarterback, not sure if he ran the ball or handed it off.

As ACC basketball begins in earnest, let’s revisit some memorable quotes from seasons past:

— Chuck Nevitt of N.C. State, explaining why he had appeared nervous during practice.

1991: “We weren’t aggressive enough with our patience.”

1997: “Other people may go out and drink. I go get something pierced.”

— Duke’s Greg Newton, explaining the multiple perforations of his eyebrow and tongue.