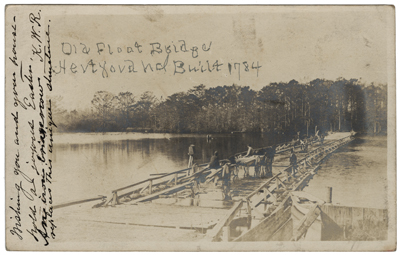 The real photo postcard from ca. 1906 shows a wooden float (or pontoon) bridge in Hertford, NC.  This bridge was built in 1784, and was attached at one end but only tethered at the other.  If a boat needed to pass through, they would untie the bridge, let it float down river so the boat could continue, and then reel in the bridge and reattach it.  According to one source, the bridge was supported by wooden whiskey barrels (“Town of Hertford Bi-Centennial,” 1958).

The wooden bridge was replaced in 1895 with an S-shaped bridge made of iron.  An excerpt from the message written on the front of the card reads, “An iron bridge now replaces this unique structure.”  The bridge was again replaced in 1929 by the State Highway Commission.