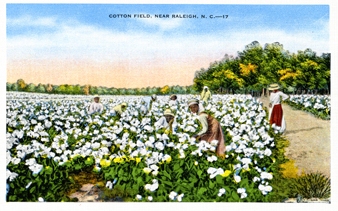 North Carolina’s agricultural roots run deep, and we have unveiled a new pathfinder called “Agriculture in North Carolina” in our research guides to outline the maps, magazines, pamphlets, postcards, and histories related to the state’s rich agricultural history.  The pathfinder covers industries that are known successes, such as hog farming, but also industries such as peanut farming (Actually, North Carolina ranks third in the nation in this crop production.).  Sections about the State Fair, farmers’ markets, plantation life, education, and women and agriculture are also featured.  If you’re interested in anything and everything having to do with North Carolina agriculture, this is a great place to get started! 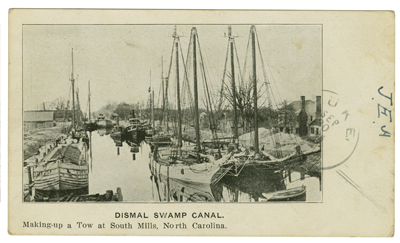 The Dismal Swamp Canal opened in 1805, and was the first man-made waterway in America.  The canal, which runs between Deep Creek, VA, and South Mills, NC, has a rather long and storied history:  Discussions between North Carolina and Virginia regarding the construction of the canal began as early 1730.  Several founding fathers weighed in on the matter, including Patrick Henry, Thomas Jefferson, and George Washington. Construction began in 1793, working from both the Virginia and North Carolina ends.  In 1805, they met in the middle and the canal was completed.

The canal played a role in the War of 1812, but later faced competition from the railroads and was almost destroyed in the Civil War.  In the late 19th Century, the canal developed a reputation as a haven for elopers, runaway slaves, and outlaws.