In a clearing in the woods in Guilford County, North Carolina, in 1781, British soldiers led by General Charles, the Lord Cornwallis, clashed with Whig troops led by General Nathanael Greene in a battle that changed the course of the American Revolution in the southern colonies and contributed to the ultimate defeat of the British at Yorktown, Virginia.

In 1780 the British, stalemated in their attempt to subdue the northern and middle colonies, turned their attention to the south. Relying on their command of the sea, they quickly gained control of the coastal areas of Georgia and North Carolina. Whig forces responded by an attack on the British advance base at Camden, South Carolina, but were defeated and scattered. George Washington, disturbed by the deteriorating military situation in the south, entrusted command of Whig forces there to General Nathanael Greene, his quartermaster general. Faced immediately with a severe supply problem, Greene divided his army into several independent units which could supply themselves more easily. They were also rallying points for Whig militia.

From his base in Camden Cornwallis struck at Greene’s independent units, hoping to destroy them or drive them from the Carolina back country. British troops and loyalist militia were themselves defeated, however, at the battle of King’s Mountain in October, 1780, and the British Legion, sent to find and destroy a detachment of troops led by General Daniel Morgan, came to disaster at the battle of Cowpens in January, 1781.

Spurred on by the defeat at Cowpens and the capture or more than six hundred British soldiers, roughly a quarter of his troops, Cornwallis led his whole army into North Carolina in pursuit of Morgan and his prisoners. Cornwallis failed to take into account, however, the extreme difficulty of moving an army in the backcountry in winter, and Morgan stayed well ahead of him. On January 25th, at Ramsour’s Mill, North Carolina, Cornwallis burned his wagon train with all his supplies in an attempt to speed up his men.

Watching Cornwallis push on recklessly into North Carolina, Nathanael Greene saw a great opportunity to catch the British far from their base. He summoned the scattered units of his command to unite with Morgan, at the same time maintaining the withdrawal northward. In the end Greene withdrew all the way into Virginia, exhausting his pursuers. By early March 1781 Greene had pulled together more than four thousand of his men including 1500 troops of the continental line and was ready to offer battle. Greene prepared for Cornwallis at Guilford Courthouse, North Carolina, organizing his forces in three lines. The first two comprised militia troops who were expected to fire only a couple of rounds before retiring. Greene’s continental regulars filled the third line. On the 15th of March, 1781, Cornwallis arrived at Guilford Courthouse. Although he was outnumbered two to one, Cornwallis attacked head on, pushing aside the militia lines and ultimately forcing the retreat of the third line as well. Left in possession of the field, Cornwallis claimed victory. The “victory,” however, had cost him more than 25 percent of his army, which was no longer fit to keep the field. Cornwallis began a slow and exhausting march to Wilmington, North Carolina, where he could be resupplied by the British navy. Greene, on the other hand turned south into South Carolina and Georgia where he began attacking the troops left behind when his opponent marched north.

Greene’s decision to move south proved a wise one as he gradually drove the inland British garrisons back to the coast. Cornwallis on the other hand elected to move north into Virginia. There, as in North Carolina, his regulars were the masters of the ground on which they stood, but their supply lines were constantly disrupted by Whig regulars and militia. Cornwallis again had to retreat to the sea at Yorktown and the protection of the navy. There he found that the navy had been driven off by the French fleet, and he was soon besieged and forced to surrender by the combined armies of Washington and Rochambeau. 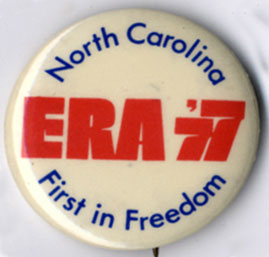 On this day in 1977: Despite last-minute long-distance lobbying by President Jimmy Carter, the North Carolina Senate defeats the Equal Rights Amendment by a 26-24 vote.

It is the second time the ERA has failed in the Senate by that vote, each time falling victim to a switch by a Charlotte senator ostensibly committed to voting yes.

The ERA will die in 1979, the deadline set by the U.S. Senate for winning ratification by the required three-quarters of the states.

Pictured: From the collection a pinback button worn by ERA advocates.