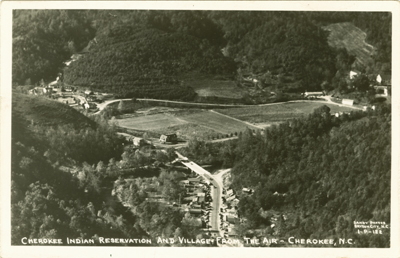 These postcards show people and activities on the reservation, including potters, weavers, athletes, dancers, and chiefs.  There are also postcards that show gift shops, restaurants, and hotels, and I was curious to know more about the relationship between the reservation and the phenomenon of tourism that is evidenced by the postcards we have of the area.

The Cherokee were heavily involved in the lumber industry until the mid-1920s.  Shortly after, the Cherokee turned to tourism as a means of economic development.  The decision by the Bureau of Indian Affairs and the Cherokee Historical Association to engage in tourist endeavors was aided by the Good Roads movement, the Great Smoky Mountains National Park (which opened in 1934), and the Blue Ridge Parkway.  These parks and roads helped develop an infrastructure that encouraged a large number of tourists to visit the area, and regional tourist advertising took the form of billboards and postcards. 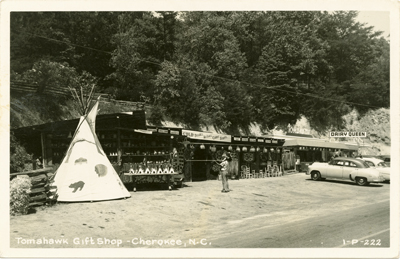 The real photo postcard above shows a Cherokee man wearing a headdress and standing in front of a strip mall that features a gift shop of Cherokee crafts and a Dairy Queen.  Cherokee men often dressed in garments that were typical of Plains Indians (rather than Cherokee dress) because Hollywood had popularized that image in the 1930s.  Christina Taylor Beard-Moose’s book, “Public Indians, Private Cherokees:  Tourism and Tradition on Tribal Ground,” gives an excellent account of the tension between maintaining traditional Cherokee culture and earning a living by “performing” for tourists. 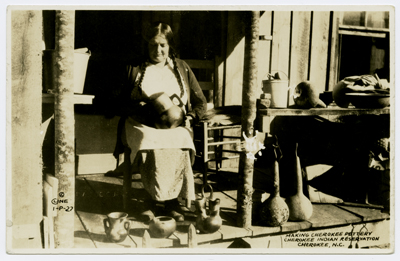 The postcard above from ca. 1940 shows a woman sitting on a porch making pottery.  Pottery, baskets, and other Cherokee crafts were sold at gift shops on the reservation and at nearby hotels, including the Grove Park Inn.  The Qualla Arts and Crafts Mutual, Inc. was created in order to protect Cherokee craftsmen and craftswomen by helping to secure fair prices for the artists.