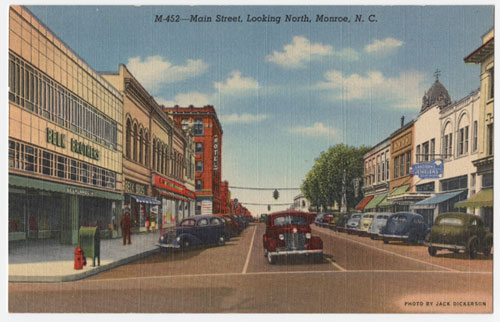 In the late 19th century, many of the large retailers we know today were establishing their first stores and offering new goods and services to middle class consumers. Macy’s doors opened in New York City in 1858; Wanamaker’s in Philadelphia opened in 1861; and Sears and Roebuck founded their business in Chicago in 1886.

After the end of the Civil War, country and general stores became popular in the South, and in 1874, William Henry Belk began working in a dry goods store in Monroe, NC. Henry Belk, as he was called, was only twelve years old when he started. He worked as a store clerk for more than a decade, and the skills he learned and the money he saved allowed him to open his own store.

During the Post-Reconstruction period, the Southern farm economy was in shambles–especially the credit system— because farmers received such low prices for their crops. Belk saw an opportunity to create a new type of store that was not based on the credit model of the Southern general store. On May 28, 1888, he opened the New York Racket on the corner of Main and Morgan in Monroe’s business district. The Racket’s business model was cash only, accept no credit, offer low prices, and provide excellent customer service. Belk was able to keep prices low because the store was not carrying the weight of the customer’s credit. As a result, he could afford to pay producers in full, which in turn lowered his cost. At the end of his first year of business, Belk’s Monroe store had turned a profit of $3,000. As the store became busier and more successful, Belk began looking for a partner and found a likely candidate in his brother, John, who left his medical practice in 1891 to join Henry in running the Monroe store. They changed the name of the store from New York Racket to W.H. Belk and Bro. They advertised aggressively in newspapers, heralding their low prices and scheduling sales when they knew they could draw a large crowd, for instance, during town parades and large celebrations.

The Belk brothers enjoyed success in their retail ventures and continued to make decisions that encouraged growth. For example, they would invest in textile mills in order to sell the cloth in their stores for less than what competitors were charging. However, in 1894, economic setbacks for the Belks became the subject of town gossip in Monroe. Henry was so insulted that he considered moving his business to Texas, but his mother convinced him to stay in North Carolina. Charlotte seemed to be the best option to open a new store–at the time, Charlotte was North Carolina’s second largest city, a commercial center for textile production in the state, and just a short train ride from Monroe. Belk opened his Charlotte store on East Trade Street in September of 1895. His brother John remained in close touch as the manager of the Monroe store. 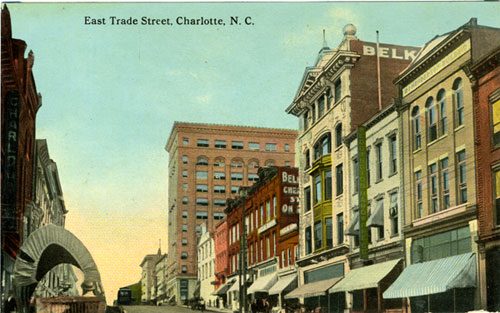 The Belk stores quickly expanded throughout the southeastern United States, and often formed strong partnerships with store managers, many of whom worked their way up from being clerks. This process resulted in the opening of Belk stores with names like Belk-Park, Belk-Hudson, and Belk-Leggett. The Belk leadership was flexible and innovative in that bulk purchasing was organized through the Belk headquarters so as to afford lower prices, but indvidual stores maintained independence to mangage their store’s promotions and services. By the mid-twentieth century, Belk stores had become a fixture of the downtown landscape in towns all over North Carolina and the Southeast.

Read all about it in the latest installment of This Month in North Carolina:

On May 29, 1988, William Henry Belk opened his first store at the corner of Main and Morgan in Monroe, N.C.  This shop evolved what would become the regional Belk department stores. 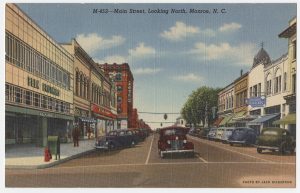