A recent comment by Jack Hilliard mentioned that the Co-Ed Rifle Team was pictured in the 1934 Yackety Yack. I went looking through the handy online version of the yearbook and found this excellent photo: 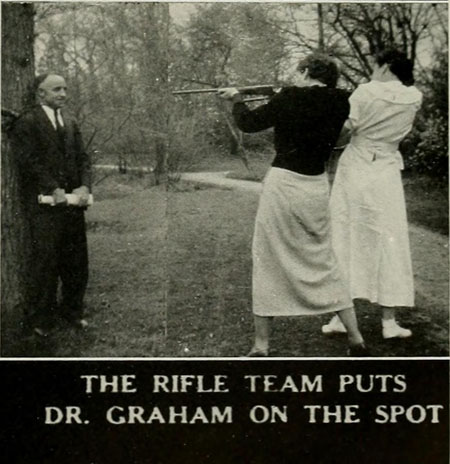 “[My arrival in Robbinsville] became a news flash, received about the way a raiding party from outer space would be.

“Most perplexing was the number of people I tried to tell about my walk across America who wouldn’t believe me. Most thought it was a clever city-boy trick to cover up drug dealing…. Now I understood how people felt in Russia. Around every corner and behind every window, I was being watched.

“I should have stopped looking for a job and moved on. But I decided to be stubborn.”

Jenkins’ resolve soon succumbed to the threat of lynching: “I was guilty for the crime of being a stranger,” he said later.  “A couple of law enforcement officers informed me that I needed to get out town by sundown or I would find myself hanging from a pine tree….  I got out of town.” (Jenkins had a better experience — much better — in Murphy, where he enjoyed a months-long stay with a black family who saw his arrival as God’s way of testing their hospitality.)