This month, Documenting the American South highlights the complex and troubled history of North Carolina’s official policies governing the rights and disposition of its indigenous Native Americans.

Check it out at: Native Americans in North Carolina

Many of the original items can be found and used in the North Carolina Collection.

For a mouth-wateringly good read try the News & Observer‘s article on the 25 tasty dishes that define North Carolina, at least in terms of food. Barbecue, fried chicken, banana pudding, and pork chop sandwiches are all there. I particularly approved the authors’ plug for fried chicken gizzards which, along with fried chicken livers, you can’t hardly get no more. What a shame. I suppose this just goes to show that the real fun is coming up with a list of your own. What’s on your menu?

I’m happy to announce the availability of DigitalNC.org, the online home for materials published by the North Carolina Digital Heritage Center. The site is sure to be a treasure-trove of North Caroliniana and is a must-visit for regular readers of North Carolina Miscellany. 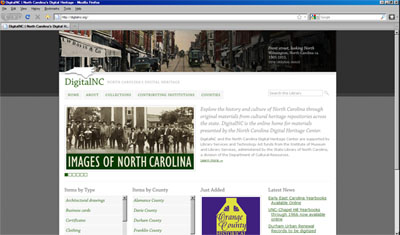 There are several projects available on the site now, including North Carolina College and University Yearbooks, Images of North Carolina, Digital Davie, Durham Urban Renewal Records, and Wilson County’s Greatest Generation: The Memories of the World War II Veterans of Wilson County. Visit often, as new materials are being added to all of these collections on a regular basis.

“Over the course of my career [as police chief in New York, Philadelphia and Miami, the lament I heard repeatedly from citizens was] ‘the only thing I really want is a cop on the beat, like the guy who patrolled the streets when I was growing up.’

“I found this lament was not of recent vintage…. My research [finally] took me to Hollywood, where I think I found our missing beat officer. His name was Officer McShane. He walked a foot beat in the 1945 movie ‘A Tree Grows in Brooklyn.’ Officer McShane knew the problems of the people on his beat intimately. He was around day and night, and he looked after the neighbors on his beat, including the family with the alcoholic father and exasperated wife and two adorable little girls. Eventually and predictably, the father dies from his affliction and Officer McShane is there to ease the widow’s pain….

Perfectly cast as McShane in the movie version of Betty Smith’s novel: Lloyd Nolan (no relation to the protagonistic Nolans).