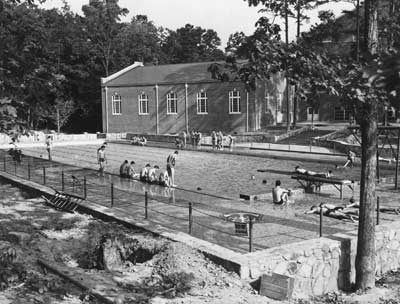 This image shows students enjoying the Kessing Pool shortly after its completion in 1943. Named for Commander Oliver Owen Kessing, the pool provided aquatic training for the Navy Pre-Flight School which trained pilots during WWII.

A recent email question led me to the discovery of a fascinating little book in our Vault Collection describing a visit to Heaven. Luzene Chipman, a Quaker from Guilford County, North Carolina, was “taken sick” in April 1877. After about two weeks she apparently passed into a coma and was believed to have died. According to her descendants she regained consciousness after she had been laid out for her wake. Chipman believed that she had indeed died and been taken to Heaven by an angel, who guided her through the gates and for a brief time showed her the New Jerusalem and its inhabitants. Eventually she was told that she must return to earth to bear witness to what she had seen. I can think of many books in our collection in which folks describe close encounters with death, but A Wonderful Revelation of Heaven is the only one I have seen giving a first hand account of the world to come.