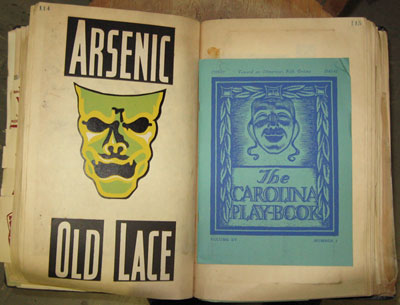 Archival collections hold thousands of scrapbooks, (the Library of Congress has at least six thousand) and the North Carolina Collection is no exception. Perhaps the largest single group there is the fifty-plus scrapbooks of the Carolina Playmakers, a university group dedicated to folk drama. Started in 1918 by Frederick Henry Koch (1877-1944), the Playmakers produced a number of writers and theatre artists including Thomas Wolfe, Paul Green, his wife Elizabeth Lay Green, Andy Griffith, and many more.

“Proff” Koch, as he came to be known, was from the University of North Dakota, where he had already built a reputation for his theatre work. (The North Carolina Collection group includes three scrapbooks about the Dakota Playmakers.) The largest group, though, documents the work of the Carolina Playmakers in annual volumes from 1918 until it’s demise in the early 1970s. There are also three volumes on the activities of the Bureau of Community Drama (an extension program from 1923-30), three about the Federal Theatre Project in North Carolina (1935-39), and two scrapbooks covering Koch’s annual performances of Dickens’ The Christmas Carol.

These scrapbooks, especially the earlier ones, contain virtually all of the Playmakers’ history. In them are newspaper and magazine articles, play programs, announcements, photographs, University memos and reports, and correspondence. It includes not only information about what was happening on campus, but also information about Playmakers’ alumni and their activities elsewhere.

In them, for example, the researcher can find in one place the first Tar Heel articles about the Playmakers, written under the direction of the newspaper’s managing editor, T. C. Wolfe; photographs from the same student’s first play, “The Return of Buck Gavin;” and a letter from Wolfe to Koch written from graduate school at Harvard in 1920, where the future author of Look Homeward, Angel was studying to be a playwright.

Researchers and archivists tend to avoid scrapbooks because they become increasingly fragile with age and use. That is true of the Playmakers scrapbooks (at least the ones I’ve made it through thus far). That’s why I recommend using a microfilmed version of the first twenty or so scrapbooks, done in the 1980’s. Along with the microfilm of the Carolina Play-Book, a journal that the Playmakers published from 1928 to 1944, these resources are a rich resource for scholars interested in early twentieth century arts and culture.