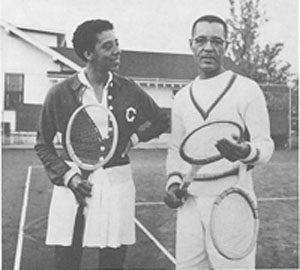 As you may have heard, Greensboro native John Isner entered the record books today as one of the competitors in the longest match in professional tennis. Over the course of three days, Isner and Frenchman Nicholas Mahut slugged it out at Wimbledon for a grueling 11 hours 5 minutes. Their momentous achievement calls to mind another great day at Wimbledon —one in which another individual with Tar Heel connections played a part.

Born in South Carolina and raised in New York City, Gibson moved to Wilmington as a 19-year-old to train with Hubert A. Eaton, an African-American doctor and civil rights pioneer in the city. Eaton (pictured above with Gibson) was also a nationally-ranked amateur in the American Tennis Association, the main organization for African Americans in the segregated world of tennis.

Gibson, too, had earned some notoriety in the world of African-American tennis. But in so doing, she had neglected her studies. She arrived in Wilmington in 1946 without a high school diploma. Consequently, while training with Eaton and living with his family, she enrolled in Williston Industrial High School. Gibson was older than most of her classmates, but nevertheless sought to participate fully in school activities, joining the band on saxophone, singing with the choir and playing basketball. Still, she later wrote, she felt out of place. She “wasn’t much for dressing up,” and preferred to spend her time playing sports with the boys. “I showed off on the football field because throwing passes better than the varsity quarterback was a way …to show that there was something I was good at.”

Being good at tennis helped Gibson garner 5 women’s singles Grand Slam titles and 6 women’s doubles Grand Slam titles. Gibson retired from amateur tennis (and there was no professional women’s tennis circuit) in 1958. Her post-tennis life included small roles on television and in the movies, a recording contract and time on the women’s golf tour. In 1975 she was appointed New Jersey’s state commissioner for athletics, a post she held for 10 years. She died in 2003 at the age of 76.

The city of Wilmington is seeking to honor Gibson with a tennis center named for its one-time resident. Officials broke ground for the Althea Gibson Tennis Center at Empie Park in September 2009.

Photo of Althea Gibson and Hubert A. Eaton from Eaton’s autobiography, Every Man Should Try.