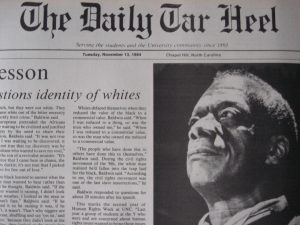 Listening to the interview with Kenan, I recalled a moment 26 years ago that he and I shared with Baldwin. Kenan and I were undergrads in an African-American literature class taught by J. Lee Greene at UNC-Chapel Hill. Kenan was a star pupil, full of insightful comments. I, on the other hand, was a diligent note taker, hoping the brilliance of Kenan and a few other students would help me better understand such classics as Baldwin’s Go Tell it On the Mountain and Ralph Ellison’s Invisible Man.

As I recall, on this particular morning Professor Greene was slow in arriving for class. And, when he finally walked in, he was accompanied by a diminutive and elegantly-dressed African-American man. That man was, of course, James Baldwin.

Sadly, I don’t remember much of what Baldwin said. I do recall being impressed by the preciseness of his speech, the mellifluousness of his voice, the angles of his face and his large eyes. Heck, he might have even lit a cigarette as he stood at the front of the class addressing our questions (the campuswide prohibition on smoking wasn’t in place then). I suspect that Randall Kenan asked a question or two. And I’m sure his memories of that day are a little more vivid than mine.

Baldwin was apparently on campus as the keynote speaker for the university’s Human Rights Week. The Daily Tar Heel reports that the writer spoke to a crowd of 1,500 at Memorial Hall on November 12. According to the paper’s account of the speech, Baldwin addressed head-on the nation’s troubled history of race relations. Here are a few quotes from that speech:

“Who is Sambo? Who is a nigger? Who is Uncle Tom? The question must come up, who is Scarlett O’Hara? What I’m suggesting is that History with a capital H is a creation of the people who think of themselves as white.”

“The people who conquered the North American wilderness were not white before they came here, not before they found me. They were Russian, Turk, Greek and French. But they were not white. They became white out of the bitter necessity to justify their crime.”

“According to me the Civil Rights Movement was one of the last slave insurrections.”

A literary great in my presence and I failed to soak it all in. Thanks to Randall Kenan, then and now, for helping me know Baldwin a little better.