As I was looking through some mid-nineteenth century issues of the Hillsborough Recorder, I noticed the following advertisement: 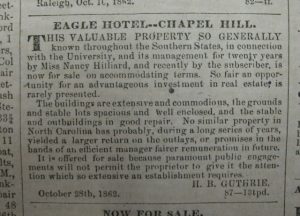 Have you ever heard of the Eagle Hotel or Miss Nancy Hilliard? If not, see below:

Ann Segur Hilliard (1807-1873), known as “Miss Nancy,” came to Chapel Hill in about 1814 with her parents. After they died, she bought from Elisha Mitchell a lot on Columbia Street and began to board students in 1825. Over the years she gained an excellent reputation for her hospitality and cooking, and in 1846 she bought the Watts Hotel property on Franklin Street for $1250, renaming it the Eagle Hotel. She operated this inn and boarding house until she sold it to Hugh B. Guthrie in 1853. Then she built a large two-story house just east of the hotel and continued to serve students meals in her large basement until after the Civil War. Destitute by 1869, the court sold her remaining household goods for $484.25 to pay some of her creditors. She died penniless in 1873 and was buried in the village cemetery. Cornelia Phillips Spencer solicited contributions from alumni to purchase a gravestone, which reads in part, “ERECTED 1886, By certain alumni of this University, in grateful remembrance of her unfailing kindness and hospitality” (Vickers, James, Thomas Scism, and Dixon Qualls. Chapel Hill: An Illustrated History. Carrboro, NC: Barclay Publishers, 1985. pp. 61, 78). [Sketch of “Miss Nancy” found in “True and Candid Compositions: The Lives and Writings of Antebellum Students at the University of North Carolina.”]