— “Wisconsin of the South”? Does that make us pimiento-cheeseheads?

— Speaking of cheese, how about a Hatcher Cracker?

— A lady of uncertain age shows up on Hatteras Island.

— Come 2061, will we still be hearing paeans to blacks in gray? But reality triumphs — grownups, take note — in a seventh-grade classroom.

— What astronaut and poet laureate have in common: cold shoulder from Guilford County schools. 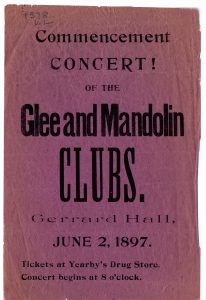 This poster (or, at least, a facsimile of it) is one of the many items in our recently opened exhibit “From Di-Phis to Loreleis: A History of Student Organizations at UNC.” And, like many of the items on display in the North Carolina Collection Gallery, there’s an interesting story that goes with it.

The 1897 Commencement Concert marked the debut of “Hail to the Brightest Star,” with lyrics by Glee Club tenor William Starr Myers. The composition would later take its name from the first few lyrics, “Hark the sound,” and, with a few minor changes, become the UNC alma mater. Myers set his lyrics to a popular college tune at the time, “Amici.” The young poet and singer, who would go on to teach political science at Princeton and serve as a speech writer for Herbert Hoover, wrote “Hark the sound of loyal voices. But in the decades that followed those loyal voices became Tar Heel voices. No one is quite sure when that happened. And there’s many a UNC grad who would point out that loyalty to “N.C.U.” (as Myers refers to UNC in a later verse) comes the day an individual first steps foot on campus.

Some have suggested that Myers’ classmate Francis Anthony Gudger wrote one of the verses and that Gudger debuted the song as a soloist. Gudger’s authorship is possible. Myers, Gudger and several others reportedly spent some time at their 50th class reunion in 1947 discussing who penned each verse. But Myers’ diary seems to cast doubt on the song’s debut as a solo. In an entry dated June 2, 1897, Myers wrote “The Glee Club sang a song–‘Hail to the Brightest Star’–the words of which I wrote, the tune being the old college song ‘Amici.’ “

As this first page from the Commencement Concert program reveals (you’ll need to click on the image), the June 2 show featured a mix of musical genres and performance ensembles. The 1897 yearbook, The Hellenian, records that the pairing of the Mandolin and Glee clubs in a concert meant that the Glee Club “could do its part better, while at the same time greater variety and interest were given to the concerts.” In an apparent nod to contemporary music, the Mandolin Club treated concertgoers to a string rendition of John Philip Sousa’s “El Capitan March,” written just a year before, in 1896.

The exhibit “From Di-Phis to Loreleis: A History of Student Organizations at UNC” is on display through May 31 in the North Carolina Collection Gallery.