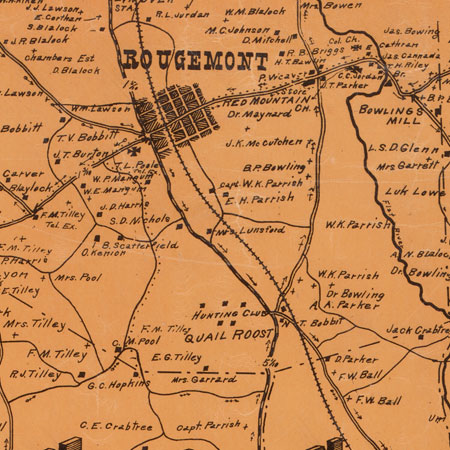 Rougemont residents hoping to create Durham County’s second town got some good news yesterday. The state’s Senate Finance Committee approved the bill and sent it on to the full Senate for a vote. The N.C. House has already approved the measure and a yay from the Senate would pave the way for residents to vote on incorporation in November.

With the help of State Rep. Winkie Wilkins, residents of the northwest Durham County community have submitted legislation on incorporation in each session of the General Assembly since 2005. Their efforts have been opposed by several Durham County legislators, who fear that the creation of a second municipality in the county could complicate future merger of services between the city of Durham and the county.

According to The North Carolina Gazetteer, Rougemont takes its name from the French words for nearby 561-foot Red Mountain–rouge mont. An 1881 map of Durham County shows a Red Mountain Post Office, so when did locals start referring to their community in French? Was there a wave of French immigration to Durham County? Or was someone putting on airs? We’ll try to find out. Meanwhile, we’ve got some questions for you. What other N.C. communities have names constructed from foreign words? And what other North Carolina counties have only one or no incorporated communities? We eagerly await your replies.

“By 1785, some influential Methodists in the Chesapeake had concluded that [Rev. William Glendinning, overwrought and perhaps suicidal] needed either to be treated by doctors or, that failing, quarantined from the faithful.

“So they tied him up and spirited him across the border to North Carolina, a place in the South then akin to what Rhode Island had been earlier in New England — a remote exile for those whose religious eccentricities embarrassed more sober Christians.”

–– From “Southern Cross: The Beginnings of the Bible Belt” by Christine Leigh Heyrman (1997)