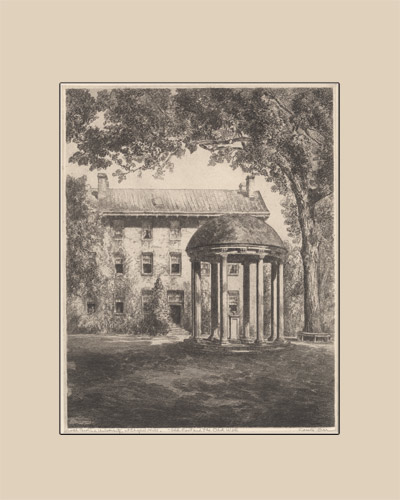 While working as a corporate lawyer in Paris in 1929, Tar Heel native Robert Lee Humber met a 50-year-old, Connecticut-born artist living there. The artist, Louis Orr, had already gained renown for his romanticized etchings of French landmarks and scenes. With Orr’s previous work in mind, Humber, a 30-year-old Greenville native, proposed a North Carolina-related project for his new friend. Orr, he said, should document important buildings in North Carolina through etchings.

Ten years after that conversation, Orr, who, by then, had produced highly-regarded etchings of the United States Capitol and American ports, arrived in North Carolina to begin the project. Over the ensuing 12 years, he produced fifty-one etchings of buildings across the state, extending from Avery and Buncombe counties in the west to Chowan and Craven counties in the east.

The North Carolina Collection Gallery is currently exhibiting Orr’s etchings, as well as original drawings, letters, photographs, and other material documenting the project. The items will remain on display through Oct. 10.