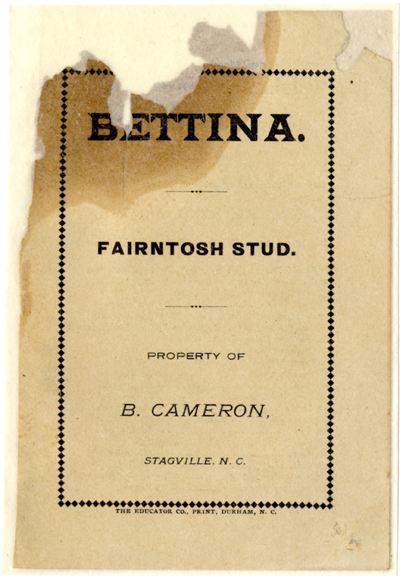 The stables of Bennehan Cameron were legendary throughout the Southeast. At the death of his father in 1891, Cameron (1854-1925) inherited about 6,200 acres, which included the plantations of Stagville and Fairntosh in Orange and Durham counties. Although he helped organize the First National Bank of Durham and was an early advocate for good roads, Cameron’s true passion was horse breeding and racing. According to family lore, Cameron would often sit with a child in his lap in the cupola of the long horse barn at Fairntosh and watch his race horses exercised below. He offered one of his favorite horses, Choctaw, for use by General Fitzhugh Lee during the Spanish-American War. Lee is said to have paraded through the streets of Havana on Choctaw after the city was seized by American troops. Choctaw eventually returned to North Carolina and lived out his life at Fairntosh.

One thought on “Talk about family trees!”