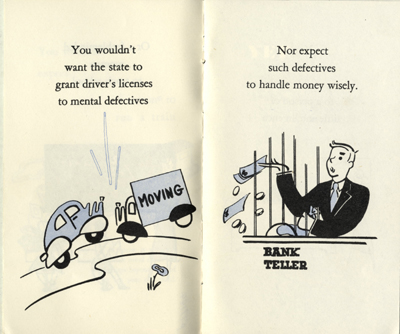 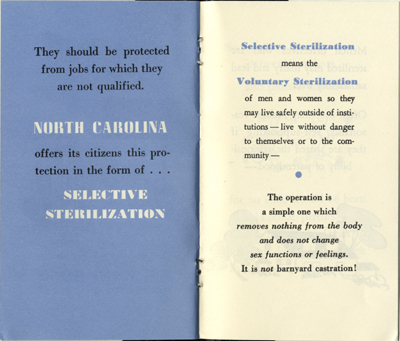 Stirring testimony in Raleigh yesterday from victims of the state’s eugenics program prompted us to dig into our stacks for vestiges of this shameful period in North Carolina history. The Human Betterment League of North Carolina was a voluntary organization founded in Winston-Salem in 1947. The group promoted eugenic sterilization and sought to educate the public about the causes and prevention of mental illnesses and handicaps. Industrialist James G. Hanes and UNC educational psychologist A. M. Jordan formed the group as a response to studies in the Orange County and Winston-Salem school systems that revealed what was perceived as large populations of students with mental disabilities.

With such publications as You Wouldn’t Expect…, the Human Betterment League of N.C. sought to educate the medical community as well as public officials, civic leaders, and members of the general public about North Carolina’s eugenics law. The law allowed for the sterilization of the “mentally ill and defective” with the approval of the State Eugenics Board. Over time the League changed its focus to genetic counseling and family planning. In 1984 the organization changed its name to the Human Genetics League. It folded in 1988.