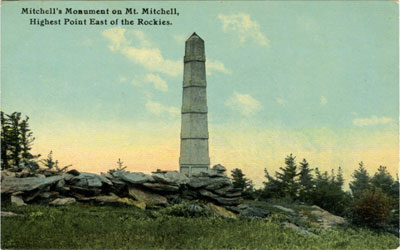 Today marks the 154th anniversary of the date on which Elisha Mitchell is believed to have died. Mitchell, a professor at UNC, fell about 40 feet to his death after apparently slipping on a precipice by a waterfall that now bears his name. The UNC professor was in Yancey County to measure the altitude of a mountain then known as Black Dome. Mitchell had recently come under attack from Congressman Thomas Lanier Clingman for his claim that Black Dome was the tallest peak in the eastern United States. Clingman claimed that another mountain in the Black Mountain range was taller.

Mitchell was last seen alive at about noon on June 27, 1857. He dismissed his son Charles, who had accompanied him on the survey trip, and told him that he would meet him two days later. While Charles Mitchell headed toward an inn in a nearby valley, his father set out in the opposite direction to meet guides who had worked with him on a survey of the peak in 1844. When Elisha Mitchell did not appear for the rendezvous with his son, local residents mounted a search party and scoured the mountain. Mitchell’s body was found July 8 at the base of what is now known as Mitchell Falls. His claim to having identified the tallest peak was later borne out and the 6,684 foot mountain today bears his name.

Although originally buried in Asheville, Mitchell’s body was re-interred at the top of Mount Mitchell in June 1858. The burial site was marked by a simple cairn until 1888 when the monument pictured in the postcard was erected. Fabricated of white bronze in Connecticut, the memorial was packed in seven cases weighing a total of 1, 041 pounds and transported by train and wagon to a spot about 10 miles from the peak in early August. The nine-piece monument was then unpacked and fastened to poles so that a team of men could carry it the remainder of the way to Mitchell’s grave. On August 8th the group was forced to abandon a “wigwam” in which they were sleeping and take shelter under a rock overhang as a violent thunderstorm raged overhead.

Describing the storm several months later in a speech published in The University Magazine, team member William B. Phillips wrote:

The thermometer fell to 40 degrees F., the wind blew with a violence unknown in these lower regions, while the incessant and blinding sheets of lightning lit up the sombre gorges to right and left and before with lurid and ghastly flames, and each neighboring peak echoed in thundering reverberations the shoutings of the great storm king….

On Thursday, August 9th, however, the sun rose majestically from behind the sharp outline of the Pinnacle, gazed for a moment upon that cowed and shivering group and then betook himself to his daily task of warming and beautifying the earth.

The monument was erected and the last screws of the inscription plate turned on August 18. The plate reads:

Here lies in hope of a blessed resurrection the body of the Rev. Elisha Mitchell, D.D., who after being for 39 years a Professor in the University of North Carolina, lost his life in the scientific exploration of this mountain in the 64th year of his age, June 27, 1857.

Phillips writes that no ceremony marked the erection of the monument. His account of the transport and building of the memorial was delivered as a speech at UNC in October 1888. Phillips closed his address with these words:

This simple bronze monument will stand for many generations, overlooking the beautiful valley of the Catawba and the Estatoe, fronting the graceful outlines of the Linville Mountains and Grandfather, marking the spot where repose the remains of a great and good man, whose example shineth ever more brightly, and whose memory will ever be cherished at this venerable seat of learning, so dear to him, so full of memorials of one of the wisest and best of teachers. Si monumentum queris, circumspice!

While Elisha Mitchell is remembered in numerous ways today–the mountain, the waterfall, a building at UNC and the state’s scientific society–the monument pictured above lasted just 27 years. A victim to defacement by “irreverent visitors” (in the words of former Governor Locke Craig), the bronze memorial was blown down by the wind in January 1915. However, a plaque bearing the inscription cited above sits at the base of the observation tower on Mount Mitchell. Could it be the original?

“[James B.] Duke’s only failure came when he attempted to integrate the cigar industry into his increasingly extensive fold. Cigars, he found, fit poorly with his system of mechanization, standardization and national marketing…. Production of cigars would remain labor intensive, skilled work; they continued to be distributed in small quantities to specialized dealers….

“The cigar represented the past, the cigarette the future. [But] for Duke, who had transformed his father’s plug business into a multinational giant, it was all just tobacco. His aggressive moves to incorporate the full range of tobacco products would ultimately bring him into conflict with the federal government.”

— From “The Cigarette Century: The Rise, Fall and Deadly Persistence of the Product that Defined America”  (2007) by Allan M. Brandt