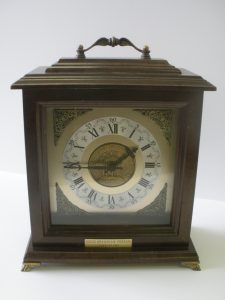 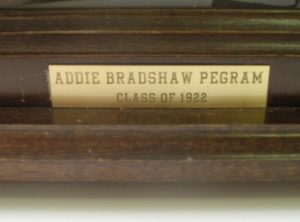 This Artifact of the Month post highlights a mantel clock given to School of Pharmacy alumna Adeline Bush Bradshaw Pegram. The Bulova clock’s face features a metal relief of the Old Well circumscribed by the University’s name. The donor believes that this clock was given to Addie Bradshaw at the time of her graduation in 1922; however the name plate at the base of the clock includes the recipient’s married name, which seems to indicate that the gift was presented at a later date. The clock’s original mechanics have been replaced with electric parts.

In the 1922 Yackety Yack, Adeline Bradshaw of Lenoir, North Carolina is described as “a regular good sport.” According to Anderson’s 1983 Heritage of Caldwell County, Volume I, Bradshaw played on the University’s first female basketball team, which was “only allowed to play on an outdoor graveled court” (p. 457). The volume also alleges that Bradshaw was the only girl in her class and the first woman to graduate from UNC’s School of Pharmacy, which could have possibly inspired the presentation of the mantel clock. The Yackety Yack appears to contradict this claim though since Beatrice Averitt of Fayetteville was also a member of the School of Pharmacy’s class of 1922. Averitt and Bradshaw served together as Pharmacy School representatives in the UNC Woman’s Association during the 1921-1922 school year.

After graduating from the School of Pharmacy at the age of 21, Addie returned to Lenoir and worked in Ballew’s Pharmacy. She met a recent State College graduate who worked at the Caldwell Creamery and married Calvin Winchester Pegram in 1923; they had four daughters. The family moved to Blacksburg, Virginia where Calvin was a professor at Virginia Polytechnic Institute (commonly known as Virginia Tech). At some point, the family returned to North Carolina and lived in the Triangle area. Calvin was appointed chief of the dairy division of the North Carolina Department of Agriculture by Governor Kerr Scott, and Addie owned and managed a drug store in Apex. Anderson’s book claims that “many farm families came to her for medical advise [sic] and assistance” (p. 457). Addie passed away on October 17, 1987 at the age of 87. The true origin of her mantel clock remains unknown, but her contribution to the University’s legacy carries on.

“Can a peaceable literary vegetarian from Brooklyn bring together what a bloody Southern basketball rivalry has torn asunder? That was surely the hope of administrators at Duke and the University of North Carolina, Chapel Hill, when they chose Jonathan Safran Foer’s ‘Eating Animals’ as the joint summer reading for this fall’s incoming freshmen.

“So far, the carnivore-unfriendly choice does not seem to have elicited any complaints from the local barbecue industry, though the state’s educators have courted controversy before. In 2002, conservative pundits and state legislators howled when U.N.C. assigned Michael Sells’s ‘Approaching the Qur’an,’ calling it an insult to the memory of Sept. 11. In 2003, a student group called The Committee for a Better Carolina denounced that year’s choice, Barbara Ehrenreich’s ‘Nickel and Dimed,’ as a ‘classic Marxist rant’ and  ‘intellectual pornography with no redeeming characteristics.’ ”