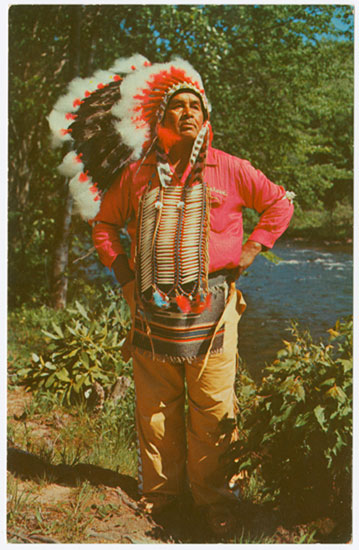 We recently surpassed 9,000 images on our North Carolina Postcards website. The card above is among the lot that took us over the mark. It stood out to me because of the man’s proud bearing. The caption reads:

JESSIE J. LOSSIE–Cherokee Indian–on the banks of the Oconaluftee River, Cherokee Indian Reservation, North Carolina. The Qualla Reservation on the edge of the Great Smoky Mountains National Park is the home of more than 3000 Cherokees belonging to the Eastern Band.

Curious about the story behind the image, I searched around for information on Jessie J. Lossie. I haven’t been able to find much. According to the Social Security Death Index, Jesse Lossie (note the spelling of the first name) was born April 1, 1906 and died in August 1961. His Social Security card was issued in North Carolina. Are Jesse Lossie and Jessie J. Lossie one in the same?

My search also suggests that W.M. Cline Company of Chattanooga,Tennessee, the postcard’s publisher, sold a lot of copies of this card. Numerous websites offer the card. Prices range from 90 cents to $12.90. This information provoked more questions. How was Jessie J. Lossie chosen for the photograph? Did he dress in such Native American finery all the time? And, considering our state’s and nation’s troubled relation with the Cherokee, was Jessie Lossie sufficiently compensated for posing? If you can add to the story, please do so.