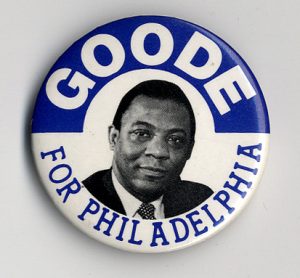 On this day in 1983: Wilson Goode, one of eight children of Northampton County sharecroppers, is elected the first black mayor of Philadelphia. His family moved from North Carolina to Philadelphia when he was 15.

The low point of Goode’s eight years in office will come in 1985, when police trying to evict the radical group MOVE from its rowhouse headquarters drop a bomb on the roof. The resulting fire kills 11 people, including five children, and destroys more than 60 houses.

Pictured: Pinback from 1983. The slogan “Still Goode for Philadelphia” was seen in later campaigns.