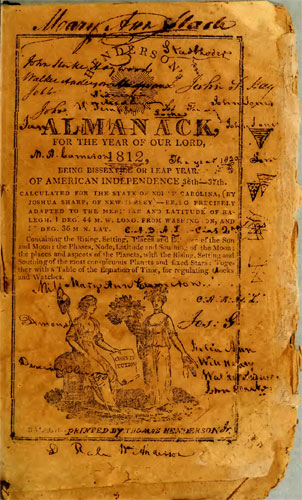 A person about to open a dram shop asked another what he should put on his sign. “Beggars made here” was the reply.

Two men happening to jostle each other in the streets. Says one,”I never permit a blackguard to take the wall.” “I do,” said the other, and instantly made way.

From Henderson’s Almanack for the Year of Our Lord 1812….Calculated for the State of North Carolina. The almanac, whose predictions included a hard frost on February 22 and thunder on July 23, marks the 10,000th book digitized from the University Library’s collections using a high-speed scanner and software application known as the “Scribe.”

The North Carolina Collection is especially proud to have a book from its collection selected for the honor. As NCC curator Bob Anthony points out,”Two centuries ago, an almanac was often the only book in many North Carolina homes, along with a Bible. Selecting this work for digitization gives a very direct glimpse into daily life in the Tar Heel State.” It’s also proof that, over the past 200 years, Americans may not have changed as much as we would like to think.

P.S. Wondering what a blackguard is? Try 2a.

On this day in 1964: A report by U.S. surgeon general Luther Terry marshals evidence that smoking causes cancer and other diseases, effectively sending North Carolina’s tobacco industry into a long, slow slide.