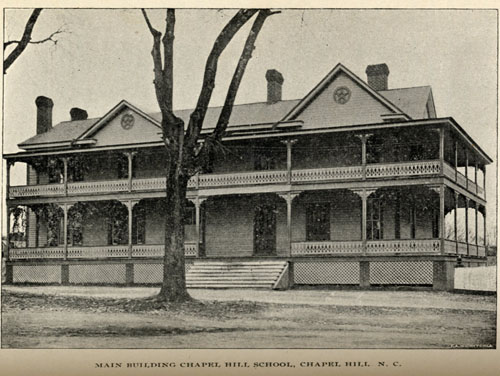 The photo above is one of 66 images of historic schools in North Carolina that the State Library of North Carolina added to its Flickr site. Our colleagues are trying to determine where each of these schools stood. The photos were included in the Biennial Report of the Superintendent of Public Instruction of North Carolina for various years in the late 1800s and early 1900s. The photo of the Chapel Hill school is from the 1896-1898 report.

As a Chapel Hill native and a proud graduate of its school system, I thought I’d take a stab at finding the location of this school. It took an hour or so. But I can now state with reasonable certainty (always a dangerous position to stake) that the building stood at (or very near) the southwest corner of Columbia and Franklin streets. It’s the current site of University Baptist Church.

The school opened in September 1896 under the supervision of John W. Canada, a Summerfield native who had graduated from UNC the previous spring. Although a young school master, Canada was not new to teaching. A farm boy, he arrived at UNC as a sophomore in fall 1893, having earned money to attend the university by teaching school in Guilford County and in South Carolina. While a student at UNC, Canada earned extra money by tutoring the older children of faculty. As Canada later wrote in his autobiography, Life at Eighty, Chapel Hill lacked schools, especially those for older students.

Funds for a very few months of public schools were available. There was no building adequate for such as might come to one. There was no special tax and no law whereby one might be levied. Through county funds, only a very limited amount was available. A lady, Miss Herndon, had a limited number of primary and kindergarten grades come to her home for a small but very good school. Mrs. Sallie Wilson, a most capable and experienced teacher, had come to town and expected to start a school. The would also be a one-room school and could not possibly cover a wide range of teaching. This would leave such work as I had done in preparing boys and girls in higher classes to such an extent that they might be ready for college not provided for.

As Canada prepared to graduate, several UNC faculty members urged him to start a school. And that he did. The Canada School, as it would become known, opened in an old hotel. Canada brought in others to help with teaching, including his younger brother, Charles, a student at UNC. Canada wrote in his autobiography:


The Canada school’s first graduating class included Louis Graves (second row, second from right),who would become the first professor of journalism at UNC in 1921 and then start the Chapel Hill Weekly two years later. Charles Maddry (second row, third from right) became a Baptist minister and played a part in the construction of the Baptist church that would later occupy the site of the Canada school. Later graduates of the school included the children of such UNC notables as Presidents George T. Winston and Francis P. Venable and Professor Eben Alexander.

Within several years of opening, the Canada school was seeking a new home. Industrialist Julian Carr helped finance the building of a new 10-room schoolhouse on Pittsboro Street across from the Carolina Inn. But in May 1901, with construction of the new school still underway, Canada left Chapel Hill for Denver, Colorado, where he and a friend tried their hands at writing and publishing textbooks. Two years later, having met little success in Colorado, Canada headed to Texas, where in short order he established a weekly newspaper in Kingsville, a cattle ranching town between Corpus Christi, Laredo and Brownsville. Canada spent the remainder of his life in south Texas, eventually moving from publishing to banking and the development of agricultural cooperatives. Canada was 86 when he died on February 1, 1958.

The Canada school lasted for a few years at its Pittsboro Street location, but eventually folded for lack of financial support. In 1906 the first school in Chapel Hill financed with public money opened in the Pittsboro Street schoolhouse. The first teachers included Blanche Pickard (1898 photo, first row, second from left) and Canada school graduate Nellie Roberson.

“Some beach debris is gruesome….In the 1970s a local physician found a piece of shipwreck timber on a North Carolina Outer Banks beach. The piece of cypress wood had two clumps of rust on it separated by a few inches. Close examination of the rust revealed fragments of a fibula and tibia in each. The explanation: The wood fragment was part of a slave ship that sank with its human  cargo shackled to ship timbers, unable to escape.”

— From “The World’s Beaches: A Global Guide to the Science of the Shoreline” by Orrin H. Pilkey, William J. Neal, James Andrew Graham Cooper and Joseph T. Kelley (2011)