This blue-and-white sash, the February Artifact of the Month, was worn by Nannie Louise Davis in UNC’s 1936 commencement exercises. Badges at the shoulder and hip ornament the sash and gold tassels hang from the ends, rendering it an appropriately regal piece of regalia. 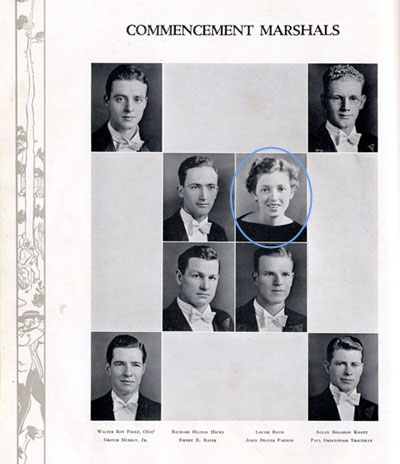 Davis was a junior when she was elected marshal by her class in 1936. This page from the Yackety Yack shows her with her fellow marshals. If she stands out from her peers on this page, it’s with good reason: Louise was the first woman to hold the position. 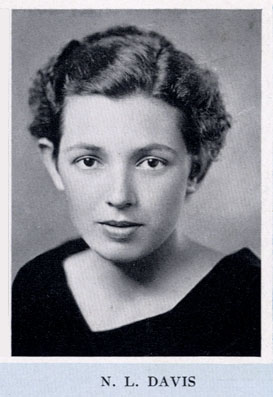 Davis was born in Goldsboro in 1914. She began her college career at Duke and transferred to UNC as a sponsored sophomore. As a UNC student, she lettered in basketball and graduated in 1937 with a B.S. in Commerce. The 1937 Yackety Yack also identifies Davis as the Secretary of the Woman’s Association, Treasurer of the Woman’s Athletic Association, President of the Co-ed Class, and a member of the Glee Club. With a résumé like that, it’s no surprise her classmates selected her for the honor of serving as a commencement marshal.

After graduating, Louise lived in Raleigh with her husband Otis Vance Jones Jr. They raised three children and, in 1950, started the Jones Brokerage Company. Louise died two years ago, on Feb. 16, 2010.

“With 36 million manuscripts and a million rare books, the Harry Ransom Center, on the campus of the University of Texas at Austin, is a standout in the exclusive club of the world’s great museum-quality collections….

“The Ransom Center is on a buying binge, but not with the long-dead titans of literature in mind. Instead, the library is pursuing the private papers of contemporary authors [and] is out to play a role in literary-canon formation….

“Alice Adams, the [Chapel Hill-reared] novelist and short-story writer, was a major acquisition in 2000 and now seems to be the subject of a subtle awareness campaign…. En route to the [David Foster] Wallace archive, one staffer pointed out the 27 boxes comprising the Adams collection. Later, another employee, while showing me [Don] DeLillo’s letters, offhandedly mentioned her love for Adams’s stories. ‘She really should be better-known,’ the woman said, looking up at me hopefully.”

— From “Canon Fodder” by Anne Trubek in The Atlantic