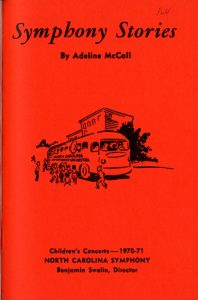 The real Carnegie Hall audience was in the schools. On Symphony Day the children knew what they were hearing, singing and playing. They had read about the music in Adeline McCall’s Symphony Stories, their teachers had attended her workshops where she not only demonstrated children’s instruments to blow, tap and shake, but got the teachers on their toes to sway with free movement to the music. As supervisor in Chapel Hill’s elementary schools, Adeline filled her music room with crafts and drums from other lands and wore colorful earrings and Mexican patterns in her clothing; they danced and finger-painted to the recordings; they created puppets and plays, and used hand-made xylophones, auto harps, and bells as they sang folk tunes thousands of other children would know on Symphony Day.

Our Children’s Concert Division was a working triangle with Ben, Adeline, the children’s division director and I, coordinator with the schools….Year after year, Adeline and I went through a laborious search of music for the Little and Full Symphony programs. We ‘borrowed’ the latest Boston Pops recordings from the Intimate Bookstore, and listened far into the night at her house.I judged selections for their mass appeal and effect in a large hall, and Adeline considered the teaching and learning possibilities….

Ben studied our proposed programs. Later he pointed out instrumentation too large for the size of the orchestra, a wind part too stressful for a player with two concerts a day, or music rental beyond our budget….Together our working trio created a 59 minute program geared to a child’s attention span that was just right for the orchestra. The full symphony played large scores with high rentals so that children could hear selections from Copland’s Rodeo and Billy the Kid, Grofe’s Hudson River and Mississippi Suites, Stravinsky’s Firebird, and Ravel’s Mother Goose Suite as well as the basics: Haydn, Handel, Mozart, earlier composers, and the three B’s. Children and adults were captivated by arrangements of ‘Old Joe Clark,’ ‘Cripple Creek,’ ‘Old Gray Mule,’ ‘Dixie,’ and ‘Raindrops Keep Fallin’ On My Head.’

-Maxine Swalin, in her book An Ear to Myself, recalling the long-running children’s music programs of the North Carolina Symphony. Swalin and her husband, Benjamin, were instrumental in leading the North Carolina Symphony through its early days. Benjamin Swalin served as the Symphony’s conductor from 1939-1972 and Maxine served as coordinator of programs for many of those years. The two collaborated with Adeline McCall to provide N.C. Symphony concerts for school children around the state. One staple of the concerts was Symphony Stories, a booklet that provided young attendees with background on the musical pieces they would hear and the individuals who composed them. The publications were rich with information and often had beautiful covers.

The children’s concerts were still going strong in the early 1970s when I was in elementary school. Each year we learned a new song and a new instrument so that we could accompany the Symphony on one piece. Tonettes, recorders and auto-harps were some of the instruments we used. To this day I can’t hear “Old Joe Clark” without recalling a spring afternoon in 1972 when my 2nd grade classmates and I sang the folk classic while accompanied by the N.C. Symphony in UNC’s Memorial Hall. For some unknown reason I was struck by a vision of Symphony Stories yesterday (February 15). I was thrilled to discover that we’ve got a collection of the booklets (Seasons 1945/46-1981/82) in the North Carolina Collection. In an odd coincidence, it turns out that Adeline McCall died on February 15, 1989.

Did the Symphony visit your town?