I found this ad for UNC in a 1907 issue of the Sylvan Valley News, published in Brevard, N.C. We’ve recently added over 400 issues of the paper, ranging from 1900-1911, to the North Carolina Newspapers digital collection. 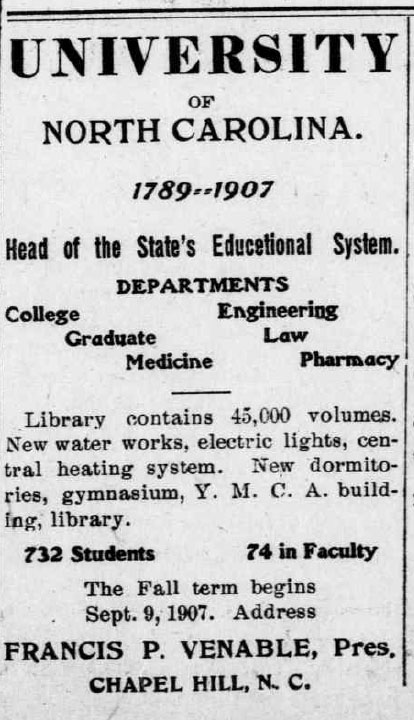 The University has grown just a bit since this ad was posted. There are definitely more than six departments (over 200 degree programs now) and the library has quite a few more than 45,000 volumes (six million and counting). We do still have electric lights.

As an aside — and I’m not sure whether the University or the newspaper staff were to blame for this — it’s difficult to maintain a claim as “Head of the State’s Educational System” when you misspell the word “educational.” 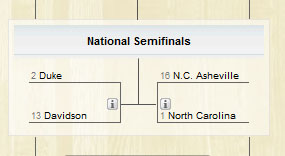 There are lots of different approaches to filling out your NCAA Basketball Tournament Bracket. As for me, I’m staying loyal to the Old North State. Proud North Carolinians will have noticed already that our state has five teams in the final field, and that they’re spread throughout the bracket, leaving the possibility, however remote, for an all-North Carolina Final Four.

In three of the four regions it’s not that far fetched. You could easily see Duke advancing in the South, and there are two options in the Midwest, with the top-ranked Tar Heels and resurgent Wolfpack. Davidson would have a tough road in the West, but there are surprises every year and the Wildcats have been as far as the Elite Eight in recent memory. The most difficult region would be the South, where the only North Carolina team is the 16-seed UNC-Asheville. I have faith. I’m picking the Bulldogs to pull out a little mountain magic and make it all the way to New Orleans.