On this day in 1787: Darby and Peter, Duplin County slaves, are convicted of murdering their master with an ax. Darby is sentenced to be “tied to a stake on the courthouse lot and there burned to death and his ashes strewd upon the ground.” Peter, less severely punished because of his youth, is sentenced to have “one half of each of his ears cut off and be branded on each cheek with the letter M” and to receive 11 lashes.

From now through the end of May, visitors to the NCC Gallery can view the exhibit “A Dialogue Between Old and New: Notable Buildings on the UNC Campus.” A quick stroll through the exhibit reveals how much architectural styles have changed since 1793 — but also how much student life has changed in that time:

One thing that hasn’t changed with the decades is a spirit of UNC pride in the student body. In that spirit, our Artifact of the Month is a Carolina banner that belonged to John DeWitt Foust, Jr. of the class of 1938. 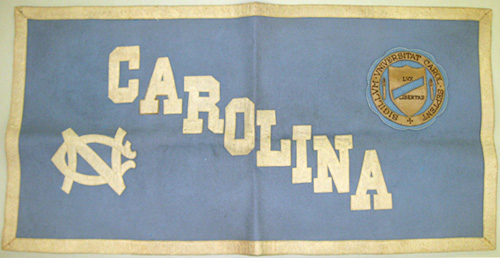 The banner is made of felt with an interlocking “NC” logo in the lower left. A leather seal in the upper right bears the school’s Latin motto “Lux libertas.” The banner likely hung on the wall in Vance Hall dormitory, where Foust lived for his first year or two at UNC. 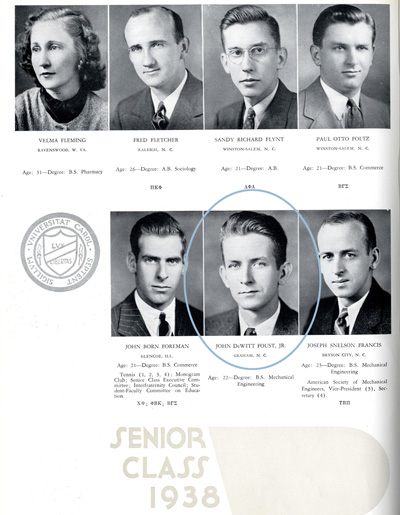 As this page from the 1938 Yackety Yack shows, John DeWitt Foust — or J.D., as he was called — earned an Engineering degree. He graduated in the last class before the Engineering department was moved to NC State. After graduating, he worked as a mechanical engineer with Newman Machine Company in Greensboro, which later became Newman-Whitney. In 1944 he married Margaret Langston, who later graduated from UNC-Greensboro. They lived in Greensboro until J.D.’s death in 1988.

This banner was donated by J.D. Foust’s son in memory of J.D. and the NCC Gallery is pleased to preserve and share it. We invite other alumni and their relatives to contact the Gallery if they’re seeking a good home for their UNC memorabilia.